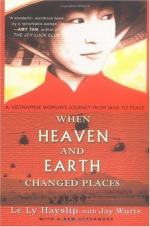 Le Ly Hayslip
This Study Guide consists of approximately 30 pages of chapter summaries, quotes, character analysis, themes, and more - everything you need to sharpen your knowledge of When Heaven and Earth Changed Places.

When Heaven and Earth Changed Places: A Vietnamese Woman's Journey from War to Peace Summary & Study Guide includes comprehensive information and analysis to help you understand the book. This study guide contains the following sections:

This detailed literature summary also contains Topics for Discussion and a Free Quiz on When Heaven and Earth Changed Places: A Vietnamese Woman's Journey from War to Peace by Le Ly Hayslip.

In 1986, Le Ly Hayslip returns to Vietnam, the home of her childhood after many years living in America. Le Ly is the sixth child of a family living in the war torn village of Ky La. The village is important to the warring Viet Cong and Republican armies because of its location, between the two factions. The armies fight over the land but also fight for the loyalty of the village people. When Le Ly is a very young child, she is caught up in the game the Viet Cong teach the children, that of playing at being informants for the Viet Cong. Le Ly says that the children want the favor of the Viet Cong so badly that they are willing to send family members and friends to their deaths. Le Ly, with a brother on the side of the Republicans and a sister with a Viet Cong police officer husband, is soon torn and loses interest. But she shows two acts of bravery - standing her ground when an American helicopter sets down in the rice paddy where she's working and later risking her life to warn of an American and Republican presence. These acts shove her to the forefront of the Viet Cong's radar. When she's arrested and taken to a prison notorious for its torture of Viet Cong soldiers and informants, her mother bribes her way out of the prison. The Viet Cong, certain she must have given information to secure her early release, become her enemy and she's forced from her village.

There begins a saga of broken relationships and short-term jobs, often given up because Le Ly refuses to become a prostitute at the hands of her tormentors in a country torn apart by civil war. When she finds herself in a relationship with a married man, she has hope but his wife forces her to leave the area and she gives birth to a son, then sets out to find a way to support her family. Her father, deeply grieved at the loss of his family, commits suicide rather than continuing to face the situation and his fear that the Viet Cong will get their hands on Le Ly. Le Ly begins a black market business, selling small trinkets and necessities such as soap, cigarettes and even marijuana to soldiers in the jungle. She takes great risks but earns great returns and keeps her family off the streets. She eventually meets an older American civil engineer who proposes marriage and takes Le Ly back to the United States with him - an escape she knows as her only chance to live a happy life away from the conflict of her homeland.

In 1986, Le Ly returns to Vietnam and her home. While she wants desperately to see her mother and siblings, she is also seeking answers to a lifetime of questions. She finds the country much as she left it in the natural tendency for people to fear each other and their government but hopes that there can eventually come changes that will heal her family and her home.

When Heaven and Earth Changed Places: A Vietnamese Woman's Journey from War to Peace from BookRags. (c)2022 BookRags, Inc. All rights reserved.