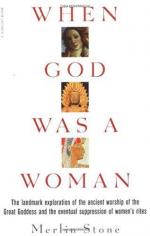 When God Was a Woman Summary & Study Guide

When God Was a Woman Summary & Study Guide Description

When God Was a Woman Summary & Study Guide includes comprehensive information and analysis to help you understand the book. This study guide contains the following sections:

This detailed literature summary also contains Topics for Discussion and a Free Quiz on When God Was a Woman by Merlin Stone.

In When God Was a Woman, Merlin Stone provides abundant information about early female religions that can make up for the disinformation and censorship that retard the liberation of women today.

Creation myths from across the ancient show that Genesis is one attempt at explaining human existence rather than a prescription for stereotyping and oppressing women. The Great Goddess has been worshiped under many titles since at least Neolithic times (7000 BCE) as a singular entity, precisely like God is today. She invents agriculture and writing, heals, and gives laws that provide women full rights. Women control Her rituals, which often include annual lamentations for a young lover/consort who dies. Priestesses are Her incarnation, and sex with them is a means of communion. This changes as "battle ax cultures" invade (2400 BCE) and transfer dominance to males. Everywhere, women slip in status from clergy to musicians, and the Goddess devolves into the "Great Wife" of her former consort. The new male deities are storm gods, blazing on mountains in fire or lightning. In Palestine, this occurs as Yahwehism develops, through Abraham (1800-1700 BCE), Moses (1300-1250 BCE), and the Levite priests who write it down (1000-600 BCE). In many myths, the female deity becomes a serpent/dragon, associated with darkness/evil. Dualism is prevalent in the Indo-European belief system.

Hebrew women are, unlike anywhere else, stripped of rights in this patriarchal society. The Canaanites are dispossessed for committing sexual abominations, which are but continuations of what has been licit and holy for millennia. The Levites invent a new morality that demands virginity until marriage for all women and fidelity of wives to husbands—both on threat of death. Clear paternity is needed to suppress matrilineal social patterns characteristic of Goddess worship. Yahweh commands his armies to destroy the existing religion and occupy the territory through bloody sieges. Many women enter the Hebrew tribes traumatized by what they have seen and remember childhood religions in which women are not maltreated. Prophets continually threaten destruction for forsaking Yahweh and worshiping Ashtoreth/Baal, and the Levites order whole towns massacred to end assimilation to surrounding culture. Despite centuries of suppression and persecution, Goddess religion continues.

In antiquity, sacred serpents are instruments of divine revelation and, like fig trees, are associated with sexual pleasure and reproduction. The Levites use these common images to attack the tenets of Goddess religion, disregarding all the elements of how She creates humans in pairs. The Levites create Adam first and make Eve serve his pleasure. They have the fruit make them aware of their sexuality, but make it a shameful thing to them. They undercut the ancient oracular tradition, allowing women to be transformed from wise counselors into silent and ignored beings. Christianity embraces the theme wholeheartedly.

Only in the eighteenth and nineteenth centuries do women begin to speak out courageously against this injustice, and the church fights to protect male supremacy even in matters of voting. Non-believers should be concerned over the church's continuing influence and power in thwarting women's liberation. Many values are so ingrained as to be almost instinctive, but knowing about early female religions helps fight ignorance, which is inculcated by censorship, disinformation, and pious denial.