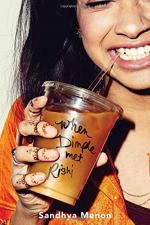 Sandhya Menon
This Study Guide consists of approximately 70 pages of chapter summaries, quotes, character analysis, themes, and more - everything you need to sharpen your knowledge of When Dimple Met Rishi.

This detailed literature summary also contains Quotes and a Free Quiz on When Dimple Met Rishi by Sandhya Menon.

Chapter 1 and 2 start with Dimple trying and succeeding in talking her parents into letting her attend Insomnia Con, a web development summer program for high schoolers. In Chapter 3, Rishi agrees to attend Insomnia Con, with his parents' encouragement, to meet Dimple to whom he has been potentially arranged to marry. In Chapter 4, Rishi walks up to Dimple at SFSU and says “hello future wife” to which she responds by throwing coffee at him and running away (25). In Chapter 5, Rishi explains to Dimple who he is, and Dimple realizes she has been unknowingly set up by her parents. In Chapter 6, Rishi and Dimple meet Celia, Dimple’s roommate and they discuss their situation. In Chapter 7 Dimple tells her parents she does not want to marry Rishi, and they are understanding and tell her to win the Insomnia Con competition.

In Chapter 8, Dimple starts class and learns that the winner of Insomnia Con will meet with Jenny Lindt and work with her. In Chapter 9, the teacher announces that Dimple and Rishi will be partners for the summer. In Chapter 10 and 11, they walk around campus doing a fun assignment together. In Chapter 12, they return to class and receive praise for their mini-project. In Chapter 13, Celia invites Dimple to go to dinner with her and her friends whom Rishi calls the “Aberzombies,” and they discuss their app design ideas (86). In Chapter 14, they walk to the restaurant together, and Rishi tells a server he wants to pay for everyone anonymously.

In Chapter 23, Rishi meets Leo Tilden but downplays his own artistic talent. In Chapters 24 - 26, they attend a party together, where Rishi participates in a sketch-off and afterwards shows Dimple his sketchpad. In Chapter 27, they realize they met as little kids, Rishi once handing Dimple a paper flower at a wedding. In Chapter 28, Dimple kisses Rishi. In Chapters 29 and 30, they plan and prepare for their first “non-date” together (185). In Chapters 31 - 34, Rishi and Dimple go on their first non-date together at a bookstore restaurant that Rishi picks out. By the end of their non-date Dimple asks to make it an official date and kisses Rishi again. In Chapters 35 and 36, they are still on their date, and Rishi sketches Dimple. In Chapter 37 they learn there will be a talent show with a significant prize and decide to do a Bollywood dance. In Chapter 38, they practice the dance, and at the end of the chapter Rishi’s brother Ashish walks in on them in Rishi’s room in a pile on the floor. In Chapter 39, Dimple meets Ashish for the first time, as Rishi calls their parents.

In Chapters 40 and 41, Ashish and Rishi fight, and Dimple mediates, asking Ashish for help with their dance. In Chapter 42, Dimple secretly sends an email to Leo Tilden with Rishi’s sketches and she, Rishi, and Ashish walk to dinner. In Chapter 43, they walk to dinner and agree to keep their relationship going long distance. In Chapter 44, Celia joins them but everyone finds out that she and Ashish had hooked up, and they leave dinner to talk. In Chapter 45, they start to talk about having sex, and in Chapter 46 they do.

In Chapter 55, Dimple breaks up with RIshi. In Chapter 56, both Rishi and Dimple have returned home, and they both prepare for college. Dimple confronts her mother and her mother says she will love her no matter what. Rishi tells his father he does not want to go to MIT and pursue engineering. As they both head to college, both Rishi and Dimple try to look for each other, Dimple going to the airport and Rishi going to Stanford. Both frustrated, they go to the Starbucks at SFSU where they first met and run into each other. They both apologize and thank the other for what they have done (Dimple emailing Leo Tilden, Rishi connecting Dimple and Jenny Lindt). The book ends with them reuniting, deciding to get back together, and kissing.

More summaries and resources for teaching or studying When Dimple Met Rishi.