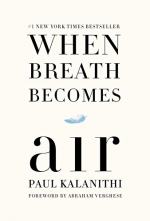 Paul Kalanithi
This Study Guide consists of approximately 45 pages of chapter summaries, quotes, character analysis, themes, and more - everything you need to sharpen your knowledge of When Breath Becomes Air.

The book begins with an introduction by writer and physician Abraham Verghese, who shares with the author an interest in the relationship between mind, brain, and body, and also an interest in the relationship between life and death. This introduction is followed by a Prologue, written by the author, in which he describes the immediate aftermath of his initial diagnosis, the human shock of the experience entwined with, and colored by, the intellectual knowledge provided by his training as a physician and surgeon.

The first part of the main body of the book is entitled “In Perfect Health I Begin,” and sketches in the author’s life and experiences in the years before his diagnosis. There are glimpses of his family life (his Caucasian father was a physician, his South Asian mother was an advocate for education), his early years as a student (in which, partly as a result of his mother’s influence, he developed a love for literature), and his eventual decisions to first take a degree in literature, but then become a physician. He came to believe, he writes, that his simultaneous quests for meaning in life and for the relationship between the mind and the brain could arrive at a conclusion (read: wisdom, and/or insight) if he examined both the wisdom of the mind (as manifest in literature) and the function of the brain (as manifest in its anatomy and relationship with the rest of the physical body). He also writes about what might be described as a secondary quest: to examine and improve the general relationship between doctors and patients, exploring ways to make each seem to the other more like a human being, as opposed to a function. That relationship, his narrative suggests, could take into account that there is more to both than just a body and /or knowledge: there is also mind, spirit, and innate wisdom.

In the second part of the book’s main body, “Cease Not till Death,” the author continues his consideration and exploration of these themes and ideas but from a perspective that might be described as inside a situation that, up to that point, he had been somewhat apart from: that is, from the perspective of someone actually experiencing deterioration and death, as opposed to that of someone outside it and trying to prevent it. As the narrative portrays the author’s mental, emotional, and physical experiences going through treatment for cancer, it also communicates how his insights both deepened and broadened; how he became more deeply aware of both his strengths and his vulnerabilities; and how it became possible to live and/or function with awareness of the interplay of past, present, and future. In this section, the book presents one of its most significant, not to mention thematically relevant, ironies: the fact that even as his illness is becoming progressively more debilitating, and more and more likely to be fatal, the author also becomes a father, bringing a new life into the world as he himself is coming closer to leaving it. This part of the book concludes with a section written in present tense narration, as the author describes what eventually are revealed to be his last days: holding his daughter, celebrating both his and her lives, and the fact that he was / is able to be with her for at least a short while.

The final section of the book is an epilogue written from the first person perspective of Kalanithi’s wife Lucy. She describes her husband’s death, funeral, and burial; her own process of grieving, entwined with the surprising (to her) realization that love continues and deepens even after death; and that the book is, to her and to others who knew the author, an extension of his life and work. In the same way as he reached out to his patients, she writes, in an effort to connect with their vulnerabilities and their strengths, with the book he is reaching out to people in general, sharing insight, sharing hope, and sharing both the questions he and everyone else has about the meaning of life, illness, and death … and what answers he managed to find in his relatively few years on earth.

More summaries and resources for teaching or studying When Breath Becomes Air.