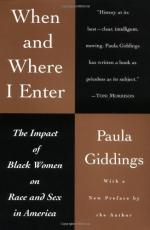 Plot Summary
+Chapters Summary and Analysis
To Sell My Life As Dearly As Possible
Casting of the Die
To Choose Again, Freely
Prelude to a Movement
Defending Our Name
To be a Woman Sublime
The Quest for Woman Suffrage
Cusp of a New Era
The Radical Interracialists
Toward Interracial Cooperation
A Search for Self
Enter Mary McLeod Bethune
Black Braintrusters
The Second World War and After
Dress Rehearsal for the Sixties, Coming Full Circle, Women's Movement and Black Discontent, Strong Women and Strutting Men, and Outlook
Free Quiz
Characters
Objects/Places
Themes
Style
Quotes
Topics for Discussion
Order our When and Where I Enter: The Impact of Black Women on Race and Sex in America Study Guide

When and Where I Enter: The Impact of Black Women on Race and Sex in America - The Radical Interracialists Summary & Analysis

Paula Giddings
This Study Guide consists of approximately 27 pages of chapter summaries, quotes, character analysis, themes, and more - everything you need to sharpen your knowledge of When and Where I Enter.

The Radical Interracialists Summary and Analysis

By 1919, there's an increased spirit of defiance among Blacks as a whole. Zora Neal Hurston, a student at Howard University, is angered when the school's White president apologizes for having a book advocating social equality in the school's library. The concept of the New Negro is introduced as new social goals emerge.

There is increased hostility between Black and White suffragists. When the right to vote is granted, Black women rush out in droves to register. The movement meets with opposition that is noted to be the same as efforts to disenfranchise Black men. Black women begin entering efforts to address the race issue as opposed to former efforts related to the women's issue. It's noted that this lesson probably eliminates the idea that women's issues are more important than race.

During one particular conflict, the...

(read more from the The Radical Interracialists Summary)

More summaries and resources for teaching or studying When and Where I Enter: The Impact of Black Women on Race and Sex in America.

When and Where I Enter: The Impact of Black Women on Race and Sex in America from BookRags. (c)2022 BookRags, Inc. All rights reserved.