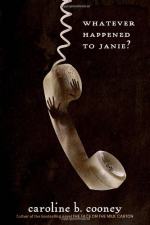 Caroline B. Cooney
This Study Guide consists of approximately 48 pages of chapter summaries, quotes, character analysis, themes, and more - everything you need to sharpen your knowledge of Whatever Happened to Janie?.

Whatever Happened to Janie? Summary & Study Guide includes comprehensive information and analysis to help you understand the book. This study guide contains the following sections:

This detailed literature summary also contains Topics for Discussion on Whatever Happened to Janie? by Caroline B. Cooney.

Whatever Happened To Janie by Caroline B. Cooney is the second in a series titled "The Janie Books," which centers on the events and consequences of the kidnapping of Jennie Spring. In this second book, Jennie has already discovered her three and a half year old face on the back of a milk carton. Twelve years have passed since she was taken, and she has grown up as Janie Johnson two states away from where she was kidnapped in New Jersey. This book picks up after Janie has told her boyfriend that she found her face on a carton, and following a great deal of indecision on her part, finally follows up on it to assure her real parents that she is alright. The court session that soon follows grants the Spring parents custody of the minor, Jennie, and she is sent home.

For everyone involved, this is a nightmare. The couple who raise Jennie as Janie do so unaware that she was kidnapped, believing her to be their granddaughter after their troubled daughter Hannah drops her off with them one day asking them to raise her. They do so, and almost thirteen years later, they are losing her just like they lost their only daughter Hannah and at close to the same age. The effects are devastating. The Spring family is in a state of chaos, waiting to welcome home the middle daughter who has three brothers and a sister waiting anxiously for her arrival. Janie doesn't want to go. She doesn't want to be Jennie. She doesn't want to be ripped out of the life she knows, and live with strangers. She's terrified, but she goes because the court gives her no choice. The Johnson parents are supportive and tell Janie that she has to try and want her to behave like the daughter they raised. Janie tries, but not hard. Her mind is at home with what she considers to be her real parents. She misses them so badly that she aches inside, crying herself to sleep most nights in the beginning. Jodie, who shares her bedroom with her long lost sister is devastated. She'd had dreams all her life of what it would be like to have a sister so close to her age at home with her. She wanted nights giggling under the covers, a sister she could share her deepest secrets with, and someone who would know her in a way no friend could. Jodie had a vision of what life would be like, but it isn't.

Janie ignores the family when they address her as Jennie, complains about the style of food that they all eat (including occasional junk foods like pizza), and uses every opportunity to let the Spring household know that they are not her family. Slowly, she begins to relax. They start to have some almost normal days together as a family. Jennie realizes that she actually likes the Spring family, but deep down somewhere inside, she feels like this is a betrayal to her 'real' parents at the same time. She knows that without her there, the Johnson parents have fallen apart emotionally. A visit from the police announcing that they intend to search for and charge Hannah Johnson pushes Jennie over the edge. The next morning she quietly tells the mother who waited thirteen years for news of her daughter and could hardly wait to wrap her arms around her again that she wants to go back to her real parents. She wants to go home.

The older Spring children, Stephen and Jodie, believe Jennie is a spoiled brat who is willfully devastating their parents, and they deeply resent her behavior at first, but the resentment is soon transferred to Hannah, the catalyst of the entire nightmare. Determined to do something about it, Stephen and Jodie make their way to New York City where Hannah was last seen. They are convinced that by searching soup kitchens they will be able to pick up her trail. It is an eye opening day for both Spring children as they cope with the incredible press of people in the downtown core. After almost losing Jodie, they decide to finally head home. Stephen and Jodie realize on the train that they are no longer angry. In fact, they resolve to visit Janie in the summer at her home with the Johnson family and get to know their sister better.

More summaries and resources for teaching or studying Whatever Happened to Janie?.

Whatever Happened to Janie? from BookRags. (c)2022 BookRags, Inc. All rights reserved.