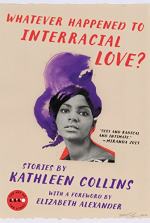 Plot Summary
+Chapters Summary and Analysis
Epigraph and Foreword
Stories 1 and 2: "Exteriors" and "Interiors"
Story 3: "The Uncle"
Story 4: "How Does One Say"
Story 5: "Only Once"
Story 6: "Whatever Happened to Interracial Love?"
Story 7: "Conference: Parts I and II"
Story 8: "The Happy Family"
Stories 9 and 10: "Treatment for a Story" and "Stepping Back"
Story 11: "When Love Withers All of Life Cries"
Stories 12 and 13: "Broken Spirit" and "Documentary Style"
Story 14: "Lifelines"
Story 15: "Of Poets, Galleries, New York Passages"
Story 16: "Dead Memories ... Dead Dreams"
Free Quiz
Characters
Symbols and Symbolism
Settings
Themes and Motifs
Styles
Quotes
Order our Whatever Happened to Interracial Love? Study Guide

Kathleen Collins
This Study Guide consists of approximately 79 pages of chapter summaries, quotes, character analysis, themes, and more - everything you need to sharpen your knowledge of Whatever Happened to Interracial Love?.

Whatever Happened to Interracial Love? Summary & Study Guide includes comprehensive information and analysis to help you understand the book. This study guide contains the following sections:

This detailed literature summary also contains Quotes and a Free Quiz on Whatever Happened to Interracial Love? by Kathleen Collins.

The following version of this book was used to create this study guide: Collins, Kathleen. Whatever Happened to Interracial Love? New York, Harper Collins, 2016. Paperback.

Elizabeth Alexander’s introduction sets up the political and artistic climate of young black female intellectuals in the 1980s, situating Kathleen Collins’ work within that context and preparing the reader for some of the stories’ significant ideas.

“Exteriors”: A film director sets up and shoots the story of a love affair in a small, dilapidated apartment.

“Interiors”: A husband and wife deliver monologues explaining their reactions to his infidelity. He tries to explain himself while she tries to understand herself through a series of ill-fated hobbies.

“The Uncle”: A woman narrates the story of her uncle, a former black athlete who dedicates his life to his disappointment.

“How Does One Say”: A young black woman finds her confidence and learns to accept her own beauty during an affair with a professor at French summer school.

“Only Once”: A thrill-seeking young man and his girlfriend struggle with love and risk.

“Whatever Happened to Interracial Love?”: A generation of educated young people living in Manhattan pursue interracial relationships and social change in the summer of 1963, only to be disillusioned when change and integration prove much more difficult than they expected.

“Conference: Parts I and II”: Two young women deliver contrasting monologues about their unsuccessful romantic experiences at the National Student Conference in Minneapolis, both with ambitious, light-skinned young black men.

“The Happy Family”: A middle-aged white narrator tries to explain the nature of the only “truly happy family” he has ever met, despite the tragic fate that befalls them.

“Treatment for a Story”: A woman visits her lover but finds his self-absorption and his cluttered apartment oppressive.

“Stepping Back”: An affluent and cultured black woman finally meets a black man as elegant as she is, only to be stymied by stereotypes of black female sexuality.

“When Love Withers All of Life Cries”: In movie-script style, a man remembers a missed chance at love when he had to choose whether to prioritize self-exploration or settling down.

“Broken Spirit”: A journalist newly arrived in the United States from South Africa struggles with homesickness and his sense of entrapment.

“Documentary Style”: A black filmmaker fresh out of the navy enthusiastically works at his first cameraman job, only to be overcome by his aggression and his belief that he is underappreciated.

“Lifelines”: A woman whose husband has left her continues to exchange letters with him even as she pursues an independent and more fulfilling life, guided by an encounter with a seer.

“Of Poets, Galleries, New York Passages”: A playwright and poet returns to New York to visit friends, and in an evening’s conversation they challenge each other’s ideas of memory, art, and femininity.

“Dead Memories … Dead Dreams”: Lillie, the coddled daughter of a rich, light-skinned black family, chooses to marry a darker man of lower social status. After her death, her daughter must navigate the social expectations and prejudices of both her father and her mother’s family as each seeks to gain ascendancy.

More summaries and resources for teaching or studying Whatever Happened to Interracial Love?.

Whatever Happened to Interracial Love? from BookRags. (c)2022 BookRags, Inc. All rights reserved.