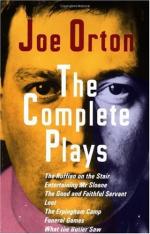 Books Like What the Butler Saw by Joe Orton | Suggested Reading

Loot, an Orton play first produced in 1966, is a farce focusing on twentieth-century taboos surrounding death. In this send-up of the modern detective story, Orton also pokes fun at authority, focusing, in this play, on the police.

The Birthday Party is a 1958 play by Harold Pinter, a British dramatist who influenced Orton's work, particularly in matters of comedy, social satire, and dialogue.

The Importance of Being Earnest, an 1895 play by Oscar Wilde, had a great deal of influence on Orton's work. What the Butler Saw relies on dialogue very similar to Wilde's, and the ending of Orton's play parodies Wilde's final scene.

One Flew over the Cuckoo's Nest, a 1962 novel by Ken Kesey, also focuses on the madness of psychiatry, though in a much more serious way.

Made into a 1975 film starring Jack Nicholson, Kesey's novel helped to foster a...