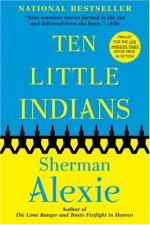 Introduction & Overview of What You Pawn I Will Redeem

Sherman Alexie
This Study Guide consists of approximately 24 pages of chapter summaries, quotes, character analysis, themes, and more - everything you need to sharpen your knowledge of What You Pawn I Will Redeem.

What You Pawn I Will Redeem Summary & Study Guide Description

What You Pawn I Will Redeem Summary & Study Guide includes comprehensive information and analysis to help you understand the book. This study guide contains the following sections:

This detailed literature summary also contains Bibliography on What You Pawn I Will Redeem by Sherman Alexie.

"What You Pawn I Will Redeem," first published in the April 2003 issue of The New Yorker magazine, is Sherman Alexie's contemporary take on the classic quest tale. The main character, Jackson Jackson, embarks on a journey to reclaim his grandmother's stolen powwow regalia, a quest that becomes a journey toward fulfillment and personal identity. Along the way, Jackson's interactions with friends and strangers help fill in the details of his life and his character. As a homeless Spokane Indian far from home and without family, Jackson's mission to reclaim his family heirloom becomes a link to his past, his future, and his cultural identity.

Alexie creates a world in which Jackson, who describes himself as "a Spokane Indian boy, an Interior Salish," must come to terms with his literal and figurative homelessness, despite the fact that his "people have lived within a one-hundred-mile radius of Spokane, Washington, for at least ten thousand years." The reader cannot ignore Jackson's candid references to the history of violence, oppression, and displacement that have long since characterized the indigenous experience in America. Yet Jackson's lighthearted wit and sharp sense of humor make him less like an object of pity, and more reminiscent of the Shakespearean fool—one whose keen observations, although often dismissed as the mere ramblings of an incompetent, somehow capture the essence of truth as it is experienced within the narrative.

Jackson is a generous character, embodying his own assertion that "Indians are great storytellers." He constantly struggles to assert his own identity in terms of his "Indian-ness" without falling into the pitfalls of stereotyping. He is comfortable making declarations like "it's an Indian thing," while also being capable of explaining the subtleties and cultural differences between Indian tribes. The story has a simple structure and a somewhat predictable outcome, but Alexie relies on the strength of Jackson's character to pull the reader along on his adventure. As Ann Patchett, a 2005 O. Henry Prize Juror, remarks in her essay explaining why she picked "What You Pawn I Will Redeem" to be distinguished as a Juror Favorite, "Sherman Alexie is in love with his homeless Spokane Indian narrator and so he simply steps aside to let his character have every inch of the stage."

Thematically, "What You Pawn I Will Redeem" is Alexie's attempt to play with and subvert the common motifs of the "lone Indian" and the "noble savage" that pervade much of American literature. Alexie goes beyond the stock images of Native Americans in his portrayal of Jackson and allows the character to develop a voice beyond his cultural caricature into that of an individual. Although Jackson's interactions with white men during the course of the story are pivotal, they echo with unfulfilled treaties, broken promises, and the resultant landlessness of the Native American. "What You Pawn I Will Redeem" appears as part of a collection of nine short stories, Ten Little Indians (2003).

More summaries and resources for teaching or studying What You Pawn I Will Redeem.

What You Pawn I Will Redeem from BookRags. (c)2022 BookRags, Inc. All rights reserved.