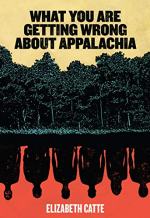 What You Are Getting Wrong About Appalachia Summary & Study Guide

Elizabeth Catte
This Study Guide consists of approximately 38 pages of chapter summaries, quotes, character analysis, themes, and more - everything you need to sharpen your knowledge of What You Are Getting Wrong About Appalachia.

What You Are Getting Wrong About Appalachia Summary & Study Guide Description

What You Are Getting Wrong About Appalachia Summary & Study Guide includes comprehensive information and analysis to help you understand the book. This study guide contains the following sections:

This detailed literature summary also contains Topics for Discussion on What You Are Getting Wrong About Appalachia by Elizabeth Catte.

The following version of this essay was used to create this study guide: Catte, Elizabeth. What You Are Getting Wrong About Appalachia. Belt Publishing, 2018.

Speaking from the perspective of an Appalachian herself, Catte begins her book by relaying impressions of Appalachia she encountered when she left the region to move Texas with her husband. While living in Texas, many inquired about the destitution of her people, seeming to understand Appalachia as a unique pocket of harrowing social decline within the United States. Catte realized that this reductive image of Appalachia largely stems from a 2016 book called Hillbilly Elegy by J.D Vance. With this in mind, she declares two objectives for her book: one, as a historian, she will use Appalachian history to counter “monolithic representations” of the region, and two, she seeks to “openly celebrate” the diverse group of people that have made radical strides for the betterment of their people (10).

The book is divided into three parts. The first, “Appalachia and the Making of Trump Country,” focuses on contemporary representations of Appalachia that proliferated during the 2016 election season. She identifies a particular brand of think pieces that were written in newspapers and magazines during this time, what she calls the “Trump country genre of election writing”. Writing to a predominantly middle class audience, this genre portrayed Appalachians as hopeless reminders of the failure of the American Dream, living in rural poverty and possessing values at odds with the larger American public. Catte argues that these sensationalized representations of Appalachians emerge from a long trend of casting Appalachians as the Other; she considers the long history of economic exploitation of Appalachians, and contends that industrialists moving into the region justified their actions by portraying them as uncivilized mountaineers in need of outside assistance, which, of course, came in the form of being employed in difficult jobs in coal mines.

The second part, “Hillbilly Elegy and the Racial Baggage of J.D Vance’s ‘Greater Appalachia,’” argues that Vance’s personal memoir fosters damaging impressions of Appalachian people. The crux of Vance’s argument is that Appalachia is full of unemployed, drug-using individuals that take advantage of the welfare system. He also contends that government assistance cannot alleviate the issues in Appalachia because the people themselves are the root of their own problem – he claims that Appalachians are of a unique Scots-Irish heritage that predisposes them to destructive behaviors. Catte argues against this claim, and writes that it is this kind of deterministic thinking that eugenicists dangerously latch onto.

In the third part, “Land Justice, People,” Catte considers the long line of social justice action in Appalachia – the amount of people that worked to improve their communities directly counters Vance’s characterization of Appalachians as genetically complacent. From people that fought against the ravages on their land from strip mining, to community organizers like Huey Perry, that implemented several anti-poverty projects, Appalachians continuously make efforts to improve their individual and collective circumstances. Yet, what Vance’s account does not acknowledge is that there are significant barriers to social change in Appalachia. In particular, wealth inequality and political corruption make it difficult to transcend the social problems that Appalachians face; however, Catte adovcates for community action projects that involve locals in addressing issues such as food scarcity, unemployment, and poor infrastructure. Though Catte suggests the problems in Appalachia still remain, she emphasizes the significance of letting Appalachians foster their own representations of themselves and their land, because ultimately, the Appalachian myth has detrimentally created a totalizing notion of a large and diverse group of people.

More summaries and resources for teaching or studying What You Are Getting Wrong About Appalachia.

What You Are Getting Wrong About Appalachia from BookRags. (c)2022 BookRags, Inc. All rights reserved.