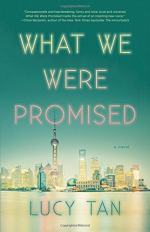 What We Were Promised Summary & Study Guide

Lucy Tan
This Study Guide consists of approximately 48 pages of chapter summaries, quotes, character analysis, themes, and more - everything you need to sharpen your knowledge of What We Were Promised.

What We Were Promised Summary & Study Guide Description

What We Were Promised Summary & Study Guide includes comprehensive information and analysis to help you understand the book. This study guide contains the following sections:

This detailed literature summary also contains Quotes and a Free Quiz on What We Were Promised by Lucy Tan.

The following version of this book was used to create this study guide: Tan, Lucy. What We Were Promised. New York: Little, Brown and Company, 2018.

Lucy Tan’s What We Were Promised opens in Shanghai in 1988, as a young couple named Lina and Wei Zhen leave their home to move to America. The novel then moves forward in time to Shanghai in 2010 to the luxurious serviced hotel complex, the Lanson Suites, where a diligent woman in her thirties named Sunny works as a housekeeper for the Zhen family, who have returned to China after 15 years in America. They are now wealthy expats: Wei is a marketing mogul in charge of bringing American products to the Chinese market and Lina is a “taitai,” a lady of leisure, and their 12-year-old daughter Karen attends boarding school abroad (32).

Two things spur a chain of events that moves the rest of the novel forward. Firstly, Lina discovers that one of her cherished bracelets has been stolen, presumably by one of her two housemaids: Sunny or Rose. And secondly, Wei receives an unexpected call from his estranged brother Qiang, who decides to visit them to see the World Expo.

Wei, who is crumbling under the shame of not pursuing a more noble career and feels emotionally distant from his wife and daughter, is nervous to see his brother again after 22 years. And Lina, who is suffering from the loneliness and aimlessness of her life in Shanghai, is uneasy because all the feelings she had once harbored for her husband’s brother have resurfaced because of his impending visit. Lina thinks that Sunny is trustworthy and kind to her daughter, so to lessen the burden of hosting, she decides to hire her as a full-time ayi—a nanny-like companion—for Karen, who is home for the summer. The Lanson Suite management view Sunny’s promotion as a sign that it must have been the other of the Zhens’ two housekeepers that stole Lina’s bracelet, and Rose is fired. Even though Sunny discovers Rose was in fact the thief, she understands the resentment that prompted her to steal the bracelet in the first place, and feels guilty that her promotion came at the cost of her friend’s livelihood. The class discrepancy in this society is emphasized by these circumstances and Sunny begrudges the ease and privilege that the Zhens live with.

Sunny is a perceptive woman and brings perspective to the novel as she witnesses the strained dynamic amongst the Zhen family as Qiang arrives. She senses that something is going on between Lina and Qiang and observes how out of touch with reality Wei is, and how distant Karen is from her parents. Over the course of Qiang’s week-long visit, tensions increase as Lina wonders if he still has feelings for her too after all these years, Wei feels judged by his brother for the path he took in life, and both Lina and Wei resent Qiang for selfishly disappearing without a trace 22 years ago. Sunny finds herself stuck in between, invisibly cooking meals and watching over Karen.

Various flashbacks bring the reader back to the past. Lina recalls the circumstances leading up to her arranged marriage with Wei and the friendship she developed with his mischievous younger brother Qiang, who gave her the ivory bracelet that was later stolen during a youthful summer together. The night before her marriage, they wanted to declare their love for each other, but the wedding went ahead as planned and he disappeared without a trace. Meanwhile, Wei grew up embodying all the hopes and dreams of his rural village and worked hard to make his father proud. And Sunny, who was also pressured into an arranged marriage despite her independent inclinations, was widowed after six months, which enabled her to move to Shanghai to earn her own living. All three of these characters have been led to their present states by both a desire for success and a sense of familial duty.

Near the end of Qiang’s visit, he and Lina find themselves alone at the World Expo; that Shanghai is the host that year is seen as the ultimate sign of the city’s place on the world stage as a cosmopolitan, global leader. It is there that they finally have the conversation they have both been waiting to have. Electrified by the attraction she still feels for him after all these years and allured by the excitement and danger that he brings to her life, Lina is also angry and demands answers. He admits his selfishness and cowardliness, crumbling before her. To help her understand, he recounts the story of the friendship between their fathers, which explains why it had to be Wei that married her, and it could never have been him.

The novel concludes as Lina feels a sense of clarity and appreciation for her steady marriage with Wei, a sort of love that was constant and built over time through shared experience. She accepts that Qiang was meant to be a brother to them all along. She also decides to have Karen closer to her by educating her in China, so that she can raise her to be a strong and independent woman with all the advantages their international position can afford her. And finally, Sunny opens her heart to the possibility of love by accepting a date with a kind and honest man named Lin Jun and decides to seizes the opportunity that her increased salary as an ayi has given her to plant roots of her own in Shanghai and invest in her own happiness.

More summaries and resources for teaching or studying What We Were Promised.

What We Were Promised from BookRags. (c)2022 BookRags, Inc. All rights reserved.