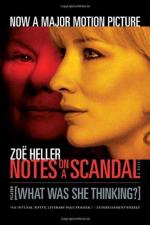 What Was She Thinking? Notes on a Scandal Summary & Study Guide

Zoe Heller
This Study Guide consists of approximately 70 pages of chapter summaries, quotes, character analysis, themes, and more - everything you need to sharpen your knowledge of What Was She Thinking? Notes on a Scandal.

What Was She Thinking? Notes on a Scandal Summary & Study Guide Description

What Was She Thinking? Notes on a Scandal Summary & Study Guide includes comprehensive information and analysis to help you understand the book. This study guide contains the following sections:

This detailed literature summary also contains Topics for Discussion and a Free Quiz on What Was She Thinking? Notes on a Scandal by Zoe Heller.

What would possess the middle-aged Sheba Hart to have an affair with her fifteen-year-old high school student? Sheba seems to have everything: an upper-class life with a professor for a husband, two children and a position teaching pottery at St. George's, a comprehensive school in North London. Barbara Covett, Sheba's friend and self-appointed caretaker/spokesperson, decides that she wants to explain Sheba's motivations. Barbara claims that her sole purpose is to shed a little light on the facts of Sheba's case. The truth is that Barbara is obsessed with Sheba and will do everything she can to keep control of her, even if it means betraying Sheba and becoming part of her scandal. What Was She Thinking is a delightfully wicked look at the world of sex, obsession and the media's fascination with scandal.

Barbara Covett feels she must write down what really happened between Sheba and her teenaged lover, Steven. Barbara, having appointed herself Sheba's spokesperson, believes the media is either exaggerating or ignoring certain facts, while outright lying about others. The two women are temporarily living in London. They have gained permission from Sheba's brother, Eddie, to stay in the house while Eddie and his family are in India.

The two women first meet at St. George, a comprehensive school in North London where Barbara teaches history and where Sheba is the new pottery teacher. Barbara is at first impressed with Sheba's aloof attitude towards the staff of St. George. Barbara imagines that Sheba is the type of person who chooses her friends wisely, and she also believes the two share a connection. In Barbara's mind, it is only a matter of time before the two of them become friends and Barbara is no longer left to her lonely existence. This changes when Sheba befriends someone whom Barbara considers completely unsuitable. Barbara is left to question whether Sheba is as intelligent as Barbara first thought.

Fulfilling Barbara's prediction, Barbara and Sheba become friends when Barbara helps her with a disciplinary problem with her students. Sheba is grateful and begins inviting Barbara to lunches and dinners with her family. As Barbara becomes increasingly attached to Sheba, she learns that Sheba is having an affair with one of the St. George students. Barbara considers Steven Connelly to be a thoroughly average boy with average looks and average intelligence. She sees no reason for Sheba's obsession with him. Sheba, however, is completely obsessed with Steven and willing to risk her comfortable and happy home life to be with Steven. At first, Barbara is angry that Sheba would keep such a massive deceit from her, and she contemplates reporting Sheba. Barbara later calms down and decides to be a friend to Sheba by convincing her to end the affair.

After Barbara's cat, Portia, becomes ill, Barbara goes to Sheba for sympathy. Sheba has no time and is anxious to meet up with her teenaged lover. Rejected, Barbara becomes angry and stops returning Sheba's calls. She also begins avoiding Sheba at the school. Barbara accepts a lunch date from the math teacher, Brian Bangs. Barbara has no illusions about Brian's interest in her, but she is happy to have something outside of school that does not include Sheba. She is mostly happy about having plans that Sheba knows nothing about. After lunch, Brian and Barbara return to his apartment, where Brian confesses his crush on Sheba. Barbara, angry at Sheba and angry with Brian for his lengthy discussion about Sheba, callously tells Brian that Sheba could never be interested in him. She tells him that Sheba likes younger men and hints at a relationship between Sheba and one of her students.

Barbara is later worried about what she has told Brian, but as time passes, she figures that Brian simply does not believe her. Everything comes to a head when Steven's mother comes to Sheba's door to confront her. She says that the headmaster called and wanted to set up a meeting about Steven. When his mother asked Steven about the meeting, Steven sobbed uncontrollably and gave his mother the letters Sheba had been writing him. Sheba is arrested and released on bail. Barbara is forced into retirement because she knew about the affair but didn't do anything about it. Richard kicks Sheba out, and Barbara takes her in.

Barbara gives up the lease on her flat so that she and Sheba can move into Eddie's house. When Sheba learns of the manuscript that Barbara has been writing, she is outraged. She believes that Barbara has been pretending to be her friend so that she could judge and exploit her. Barbara discovers that Sheba has made a statue of a mother and child. The people in the statue are Steven and Sheba. Barbara destroys the statue and then destroys any pictures Sheba still has of the affair. Sheba is so broken by everything that has happened, as well as by Barbara's betrayals, that she has an emotional breakdown. Barbara soothes her, and her control over Sheba's life is complete.

More summaries and resources for teaching or studying What Was She Thinking? Notes on a Scandal.

What Was She Thinking? Notes on a Scandal from BookRags. (c)2022 BookRags, Inc. All rights reserved.