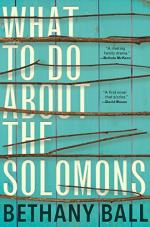 Plot Summary
+Chapters Summary and Analysis
Guy Gever Stands In the Field, In the Meantime, The Pacific
Imaleh, Little Blue Flowers
The Firm, Gabriel, Gan Eden, Shira and Marc in LA
The Pretty Past, The Reserves, Marc in Handcuffs, The Soldier Gabriel
The Happy Couple, Yakov in Youth, Napoleonic Chateau, The End for Yakov
At Night You Dive, Funeral, The Return, Maya and the Sea, Vivienne
Maya and Marc in Youth, Kadima, Marc in the Kibbutz, Gabriel
Dror Solomon, Marc and Maya By the Cypress Trees, And Shira, Vivienne, Gever
Free Quiz
Characters
Symbols and Symbolism
Settings
Themes and Motifs
Styles
Quotes
Order our What To Do About The Solomons Study Guide

What To Do About The Solomons Summary & Study Guide

Bethany Ball
This Study Guide consists of approximately 52 pages of chapter summaries, quotes, character analysis, themes, and more - everything you need to sharpen your knowledge of What To Do About The Solomons.

What To Do About The Solomons Summary & Study Guide Description

What To Do About The Solomons Summary & Study Guide includes comprehensive information and analysis to help you understand the book. This study guide contains the following sections:

This detailed literature summary also contains Quotes and a Free Quiz on What To Do About The Solomons by Bethany Ball.

This guide was created with the following version of this book: Ball, Bethany. What To Do About the Solomons. New York: Atlantic Monthly Press. 2017.

The examination of the Solomon family begins with Guy Gever, the son-in-law, and his sudden change in demeanor, as he quits his job and begins to create art, attracting unwanted attraction in his kibbutz, or small community. His wife, Keren, implores her parents to intervene but Yakov, her father, refuses, as he is tired of supporting his children and their families. As Guy furthers his artistic ambitions, Maya, Marc Solomon's old flame, returns to the kibbutz after a long time spent in Amsterdam trying to make it as an artist. She tries to commit suicide twice, saved the second time by Guy Gever. Finally, succumbing to the pressures of his family, Guy begins psychiatric treatment some time later, though the medications make him dull, and Keren considers taking him off.

In America, Carolyn, Marc Solomon's wife, has her life interrupted by a police raid at her home. She is unable to properly cooperate with them as she is in a daze. In Jerusalem, Joseph, Shira's son and Marc's nephew, finds himself alone while his mother is in America and his father does not pick him up. Unclear as to his father really is, Joseph relishes the time alone, using a credit card to order food and survive on his own. Meanwhile, Shira is in LA with her friend Ayelet, wondering about her younger, activist boyfriend, Asaf, who draws the ire of her father and is financially dependent on her. She feels resentful towards Carolyn, who seems to be a perfect mother, while also growing bored with Ayelet, who only wants to shop and do drugs. Missing Joseph, she meets with an ex-boyfriend, Michael, who tries to convince her to stay with him. Unable to properly take care of himself, Joseph begins to miss his mother dearly, emailing her to come home early if possible.

In light of the police investigation, Carolyn spends a lot of time on drugs, ignoring her problems and neglecting her children, while also remembering her youth when she was a call girl in New York and was in love with her pimp. Before the investigation, Marc was enjoying the success of his company and overlooked one of his employees, Tomer, gambling within the office. Growing up, Marc and Shira had been on different paths, as the brother followed a straight line while Shira indulged in sexual pleasures. As adults, there is an emotional gulf between the two, with Shira feeling resentful toward Marc's security and success in life, especially when she is forced to ask him for money while in LA. At home, Joseph encounters Gabriel Strauss, his alleged step-brother, and they bond, with Gabriel using Joseph's credit card to purchase a ticket back to America so he could desert the Israeli Army.

Struggling to keep their family afloat, Carolyn and Marc recall their early days living with difficulty in New York. In the midst of their troubles, husband and wife manage to bond and make love, though Carolyn harbors some resentment toward him. The novel also explores the upbringing of the family's patriarch, Yakov Solomon. Orphaned at a young age, he was taken care of his respected father who was an early leader in the kibbutz. Yakov grew to be a leader himself, creating economic opportunity for the community and himself. He was attracted to Vivienne as well, and though she had rejected him early on, she eventually acquiesced and they got married. In the present, Yakov has had a heart attack while on his treadmill and passed away.

With Yakov's death, the family returns to the kibbutz, with the exception of Ziv, the older son who was married to a man in Singapore and had no contact with Yakov before his death. On returning to Israel, Marc did not look forward to dealing with questions regarding his arrest, which Dror, his spiteful older brother, had already spread the word about. Shira, having settled in LA with Michael, returns for the funeral having fallen out of love with him. Her relationship with Joseph has become strained, as he resides primarily with his father in Jerusalem, and after a while, does not have the same attachment with her. Maya is married to Shai Skymatsky, a former Israeli commando who was Marc's best friend, and is pregnant with their child when she hears of Yakov's death and Marc's imminent arrival. With Yakov's death, Vivienne feels a burden lifted, as she is mostly happy to be rid of a husband who continuously cheated on her over the years, as a part of her also misses him.

Marc and Maya's relationship is explored through their youth, as they were heavily in love with each other. Contrary to the relationships around them, Marc and Maya were sincere in their love for each other, though they were forbidden to express their love by the elders due to the unknown fact that they were siblings, Yakov having fathered Maya during an adulterous relationship. In the present, Marc and Maya have a tense meeting and almost end up kissing, though Marc is able to grasp the situation and leave without doing anything. Shira marries Asaf, her younger boyfriend from earlier, but continues seeing other people, including Tomer, the man who cheated Marc out of his money. Carolyn arrives in Israel and has to deal with Dror's tacit criticism of Marc and her, though her drug use allows her to sleep through most of his tirade. Dror is further incensed when it is revealed that Yakov left a substantial amount of money for Maya's child, wanting to determine paternity with a DNA test. Some time later, Marc returns to visit a now flourishing Guy Gever and Keren, his brother-in-law, revealing that his mother was in Europe having met the love of her youth, and was spending time with Ziv as well while there. One last time in his mother's apartment, Marc wonders about the state of the Solomon family.

More summaries and resources for teaching or studying What To Do About The Solomons.

What To Do About The Solomons from BookRags. (c)2022 BookRags, Inc. All rights reserved.