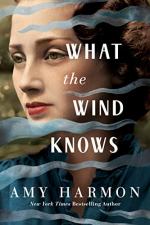 What the Wind Knows Summary & Study Guide includes comprehensive information and analysis to help you understand the book. This study guide contains the following sections:

This detailed literature summary also contains Quotes and a Free Quiz on What the Wind Knows by Amy Harmon.

Anne Gallagher is in the home of her grandfather, Eoin Gallagher, in 2001 as he is dying. Anne and Eoin have no other family and are exceptionally close. Eoin is a retired doctor who grew up in Ireland, and Anne is a successful author. Over the years, the two have traveled extensively, sometimes for Anne to do research for her current book. However, Eoin has never allowed her to return to Ireland. He says only that it is not safe and refuses to discuss it further. Anne is surprised to learn that Eoin wants her to spread his ashes in Ireland on Lough Gill.

Though Anne is grieving for Eoin, she agrees to make the trip. While she is there she does some family research. She finds the headstone for her great-grandmother, Eoin's mother, who was also named Anne Gallagher. She learns that a doctor named Thomas Smith raised Eoin after Eoin's parents died during the revolution. One day, she rents a boat and rows out onto the lough, hoping that spreading Eoin's ashes will help her begin to heal. As she dumps the ashes, a fog rolls into the landscape. Anne can see nothing until someone shoots her. She falls into the water and ends up at Garvagh Glebe, the home where Eoin grew up. Anne soon discovers she has passed back in time to 1921 and that the little boy in the household is her grandfather, Eoin. Almost everyone believes Anne to be Eoin's mother, though this Anne is the great-granddaughter of that Anne. Anne decides she must be dreaming and settles in to enjoy her time with Eoin. Eventually, she realizes she is actually in the past and tries to avoid doing anything that will reveal her true identity.

Thomas, Eoin's guardian, is wealthy for the time and place, and he is a supporter of the Irish fight for independence. Anne is surprised to discover that Thomas is friends with Michael Collins, a famous revolutionary fighter, and she is quickly enamored with this man she has read about in her study of Ireland's history. One evening, Anne, Thomas, and Michael are at a gathering at the Gresham Hotel when Anne suddenly remembers reading about a tragedy that took place at that hotel. Michael and his men discover the door has been locked and they would have died if not for Anne's warning. Michael begins to question Anne, thinking she is a spy. Eventually, he accepts that she is able to predict the future with uncanny accuracy.

Anne and Thomas spend a lot of time together and fall in love. Anne tells him the truth about her time travel. Thomas's worst fear is that Anne will return to her own time. Without knowing exactly how she crossed into this time, she cannot promise she will remain. One day, Anne chases Eoin's ball into the lough and she begins to fade away. Thomas saves her. The event results in her grandfather Eoin's fear that Ireland is not safe for Anne, which is why he never allows her to travel there until after his death. One day, an uncle of Eoin tries to drown Anne in the lough. In seconds, Anne disappears, and she finds herself washed up on the shore of the lough in 2001. She had been missing for days.

Anne learns that Garvagh Glebe is one of the properties she inherited from Eoin. She settles into the Garvagh Glebe. She knows she is pregnant with Thomas's child, and she plans to remain in Ireland. She considers trying to return to Thomas and the young Eoin, but she can never replicate the conditions. One day, Anne is walking by the lough when she hears a familiar whistle, and Thomas arrives. He had spent the years after Anne's disappearance serving as Eoin's guardian, but he set out to find Anne after Eoin left for college. As the novel comes to an end, the couple are reunited and happy together.