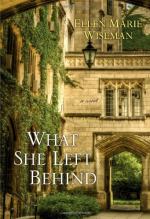 What She Left Behind Summary & Study Guide

Ellen Marie Wiseman
This Study Guide consists of approximately 55 pages of chapter summaries, quotes, character analysis, themes, and more - everything you need to sharpen your knowledge of What She Left Behind.

What She Left Behind Summary & Study Guide Description

What She Left Behind Summary & Study Guide includes comprehensive information and analysis to help you understand the book. This study guide contains the following sections:

This detailed literature summary also contains Quotes and a Free Quiz on What She Left Behind by Ellen Marie Wiseman.

Izzy Stone is a 17-year-old with a worrisome past history as a foster child. Ever since her mother shot her father to death when Izzy was 7, Izzy has bounced from one inadequate foster home to another, save for a few years with her grandmother and now a stint with Peg and Harry, who treat her well.

Peg gets Izzy involved in a mystery. Suitcases from former inmates who never left a notorious local asylum have been preserved, and Peg needs Izzy's help cataloging the vast archive of personal effects. Peg hopes to undercover who these lost souls were by what they left behind. One of the focuses of their inquiry is Clara Cartwright from the late 1920s. When Izzy is given Clara's journal by Ethan, a cute boy she likes, Izzy devours the personal contents, becoming hooked on Clara's outcome, however difficult to puzzle together from the few remaining clues.

In 1929, Clara, the 18-year-old daughter of a rich banker, rebels against her parents' strictness and secretly attends the notorious Cotton Club by night, dressed as a flapper. She falls in love with Bruno Moretti, a young but poor immigrant. She is soon secretly pregnant by him, as well. Not liking Bruno after meeting him, her father unjustly accuses Clara of “having an episode” and on very flimsy grounds, is able to have his daughter held in a series of asylums. The worse by far of these is state-run facility known as Willard asylum, which takes little mercy on Clara even when she reveals she is pregnant.

In the present, Izzy's own problems threaten to interfere with the search for Clara's past. Izzy is fighting a desire to cut herself, a problem she has only recently brought under control. Ethan's jealous girlfriend Shannon targets Izzy for a series of bullying incidents in which Izzy is made the victim. The search for Clara triggers painful memories Izzy has repressed about her own mother's long stay in a mental ward.

In the 1930s, Clara fights for her liberation from Willard asylum, especially after her baby is taken from her and given up for adoption. Bruno successfully infiltrates the asylum attempting to rescue Clara, but Dr. Roach, the head of Willard, prevents Bruno's plan. Bruno is held at Willard under false pretenses by Dr. Roach, but eventually Bruno successfully concocts an escape plan with Clara and the help of Lawrence Lawrence, an old inmate who digs graves, to escape. The plan is foiled and Bruno is killed in the escape attempt, breaking Clara's heart.

In the present, Izzy's birth mother slips into a near-death coma. Peg thoughtfully arranges transportation to the prison so Izzy can visit her dying mother. Izzy tries to make peace, but the pain is great. One saving grace occurs when Izzy reads the letters her mother sent to her over the years which Izzy has never read. They reveal the reason Izzy's mother shot her father was because the father was attempting to molest Izzy. Izzy realizes her mother sacrificed all for her.

Nurse Trench, who knew Clara, is located and interviewed by Izzy and Peg. The old nurse reveals that none other than Dr. Roach kept Clara's healthy baby girl. Childless, he and his wife named the baby Susan, never telling Clara the truth. After visiting Susan, Izzy and Peg are next shocked to learn from Susan that her birth mother, Clara, is still alive in an assisted living facility.

A first-ever reunion is staged for Clara and Susan. Reunited mother and daughter hug and Clara thanks a beaming Izzy for making it possible because of her passionate investigation. On her 18th birthday, Izzy is surprised by Peg and Harry with a surprise birthday party. They also reveal they plan to adopt her as their own daughter, just as her friends arrive with presents.

More summaries and resources for teaching or studying What She Left Behind.

What She Left Behind from BookRags. (c)2022 BookRags, Inc. All rights reserved.