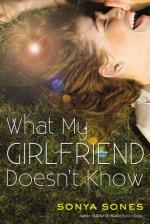 Sonya Sones
This Study Guide consists of approximately 20 pages of chapter summaries, quotes, character analysis, themes, and more - everything you need to sharpen your knowledge of What My Girlfriend Doesn't Know.

What My Girlfriend Doesn't Know Summary & Study Guide includes comprehensive information and analysis to help you understand the book. This study guide contains the following sections:

This detailed literature summary also contains Topics for Discussion and a Free Quiz on What My Girlfriend Doesn't Know by Sonya Sones.

What My Girlfriend Doesn't Know is a novel award-winning author Sonya Jones. The story follows the main character, Robin Murphy, who is a loser that the kids have made fun of since he moved to town when he was in the fourth grade. Robin improves his own social status when he starts dating one of the prettiest and most popular girls in school, Sophie Stein.

Unfortunately, for Sophie, her status for dating Robin loses Sophie her two best friends, Grace and Rachel. It also puts Sophie in a position where she is now the butt of the kids' jokes at school. "Don't be such a Murphy" is a line the kids at school coined to call someone a loser using Robin's last name. After Sophie continues to date Robin, the kids coin a new term, "Don't be such a Stein."

Sophie and Robin have attitudes that put them together against the world. They laugh at the cruel things the kids say and do until Robin hears them using "Stein" as a derogatory term. Then he decides that it is in Sophie's best interest to break up with her. Sophie doesn't agree and so they work out their difference. Eventually, Rachel, Sophie's friend stands up for Sophie and Robin, and begins to hang out with them.

In the meantime, Robin is such a talented artist that his art teacher talks his friend who teaches art at Harvard to allow Robin to sit in on the class without earning credit for it. In college, it's as if Robin is leading an entirely new life. The kids in his class think he's funny, smart, and a talented artist. Even later when they find out he's only in high school, they continue to want to be his friend.

One of the college girls allows Robin to get to "second base" with her. Unfortunately, for Robin, Sophie catches them making out on the street and breaks up with him. This coming of age story allows the characters to learn how to overcome problems at school such as bullying, but also how to deal with the daily life of being a teenager including first loves, first kisses, first time getting to "second base," and puberty in general.

More summaries and resources for teaching or studying What My Girlfriend Doesn't Know.

What My Girlfriend Doesn't Know from Gale. ©2005-2006 Thomson Gale, a part of the Thomson Corporation. All rights reserved.