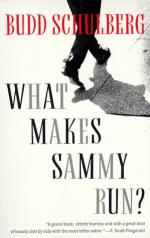 This detailed literature summary also contains Topics for Discussion and a Free Quiz on What Makes Sammy Run? by Budd Schulberg.

This novel is an exploration of the changes and personalities of Hollywood in the 1930s. The author reveals this topic through the story of a young Jewish boy named Sammy Glick and a news writer named Al Manheim. Al meets Sammy while working as a theater columnist at a New York paper called the Record. At this time Sammy is a sixteen year old hired as a copy boy. Al becomes intrigued by Sammy when he notices that no goal seems out of reach in Sammy's mind and morals completely escape the teen. Al tries to mentor him but Sammy quickly shows Al how cutthroat he can be.

Sammy undermines Al to their editor and squeezes himself into Al's column as a radio columnist. Sammy uses this break to get his name known around New York and eventually pushes his way into Hollywood. Sammy gets his first job in Hollywood by taking the credit for a meek writer's original story. The movie is a hit and Sammy is on the road to a successful movie writing career.

Around the same time Al is hired by a production company in Hollywood to also write for movies. As much as Al tries to avoid the inevitable, his path crosses Sammy's and they start spending a lot of time together. Sammy tries to introduce Al to the biggest executives in Hollywood and all of the right people for Al to get ahead. Al shows time and again that his interest is not in playing the Hollywood game in order to get ahead. At the same time Sammy shows Al that he has just as little interest in becoming a better writer or a better person. Al watches as Sammy crushes lives and dreams to get to the top while Al tries to find his place in Hollywood and in his own life.

Kit Sargent is the start of Al's turn to happiness. When Al meets Kit, she is Sammy's lover but Al quickly learns that she is nothing like Sammy and their connection is only physical. Al and Kit learn that they have many of the same interests and the same love for writing, theater and film. In their own ways they want to see purity in the writing world and more specifically in Hollywood. Al and Kit also connect due to their intrigue and understanding of Sammy Glick's motivation and tactics. Kit makes an observation about Sammy that leads to Al's revelation that Sammy's poverty stricken past is what has shaped his future.

In the end, Sammy gets the success, money and power that he fights for. He pushes his way into being named the head of World-Wide Studios and he marries the studio chairman's daughter. Even with his ultimate achievement, Sammy is left to run a never-ending race with all of the players of the Hollywood game while Al is the one with the true gift of love and a fulfilling life.