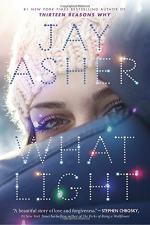 Jay Asher
This Study Guide consists of approximately 54 pages of chapter summaries, quotes, character analysis, themes, and more - everything you need to sharpen your knowledge of What Light.

What Light Summary & Study Guide includes comprehensive information and analysis to help you understand the book. This study guide contains the following sections:

This detailed literature summary also contains Quotes and a Free Quiz on What Light by Jay Asher.

The following version of the novel was used to create this study guide: Asher, Jay. What Light. Razorbill, October 18, 2006.

Every year just before Thanksgiving, Sierra travels with her family from their Oregon Christmas tree farm to a town in California to tend the family’s tree lot .Sierra loves what her family does, even though their Christmas traditions are different from those followed by other families. This particular Christmas tree selling season of her junior year is high school is different from all of the previous seasons. Sierra's parents do not think their tree lot earns enough money to justify keeping it open. If they decide to close the lot, it means that all the Christmas traditions Sierra has known all of her life will be over. Additionally, Sierra falls in love with a boy named Caleb even though she tried to keep herself from doing so because she knew her family would be leaving. Sierra fights Caleb's reputation as a troubled boy and her parents’ fears that her heart will be broken when she and her family return to Oregon.

Although Heather, who is Sierra’s friend in California, wants Sierra to have a holiday romance so the two can double date, Sierra balks at the idea of a temporary relationship. She has a reputation for being fussy about the boys she dates. Besides, her father will not let her date any of the boys who work at the tree lot. When Sierra sees Caleb, however, she changes her mind. She is captivated by his dimple and giving nature. Even when Heather shares with Sierra the rumor that Caleb went after his sister with a knife, Sierra is not willing to accept that Caleb is bad at heart.

Sierra learns that Caleb saves his tips to buy Christmas trees for people who cannot afford them. She begins helping him deliver these trees. Eventually she proves to him that he can trust her to share the truth about what happened between himself and his sister. She learns that Abby had been fussing at Caleb because she believed he had made a mistake when he encouraged her to stay with her mother after their parents divorced. Caleb told Sierra that he snapped because of the pressure being put on him by his sister and went after her with the knife to scare her.

Meanwhile, Andrew, a boy who works at the tree lot, tells Sierra’s mother and father about the rumors involving Caleb. He used the information as a way to get back at Sierra because she would not date him. Sierra’s parents had already questioned her relationship with Caleb because they would be leaving at the end of the tree selling season. They were worried that she would get her heart broken when they left and did not want her to be hurt. When they heard about Caleb’s incident with the knife, they refused to let her see Caleb any longer.

Sierra talks with her parents on two different occasions, first about the long distance relationship and second about the knife incident, asking them to give Caleb a second chance. They agree to do so when Sierra asks them to trust her. It is not until Caleb decorates the trees Sierra has planted on top of the Cardinals Peak with lights that Sierra sees how dedicated he is to her. The say goodbye with plans to attend Sierra’s winter formal in Oregon together.

More summaries and resources for teaching or studying What Light.

What Light from BookRags. (c)2022 BookRags, Inc. All rights reserved.