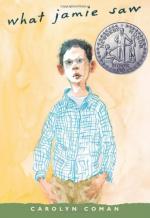 1. After Mrs. Desrochers has visited Jamie and his mother at the trailer, Jamie is sent outside. He gets very upset and suddenly panics. Why? What does he fear? His mother comforts him, puts him to bed, and calms him down. Then suddenly, he kicks her. Why?

2. In the opening chapter, describing the scene where Van throws Nin, the author uses a lot of cumulative repetition.

What effect do they create? What impact do they have on the story?

3. Hardly a festive occasion, why does Jamie think of Santa Claus when his mother brings out the bag during their exit from Van's place...