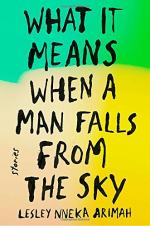 In "The Future Looks Good," Ezinma's back is crucially turned to the vengeful Godwin when he shoots her in the back (8). The phrase that Ezinma "doesn't see what came behind her" (1) alludes to both the literal unseen presence of Godwin, and the metaphorical unseen family history that has induced conflict within Ezinma's family.

As a child, the unnamed female narrator of "War Stories" frequently plays chess with her somber, quiet father. The father easily defeats her in chess, which the narrator equates to her lack of foresight both in playing chess and in social interactions. After unnecessarily punching another girl at school the next day, the narrator muses to herself: "By the end of the day, I was a queen with no pawns" (17).

The Mercedes car owned by Chinyere and Auntie Ugo's family in the story "Wild" is an indication to the reader...

What It Means When a Man Falls From the Sky from BookRags. (c)2023 BookRags, Inc. All rights reserved.