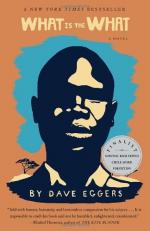 What Is the What Summary & Study Guide

Dave Eggers
This Study Guide consists of approximately 31 pages of chapter summaries, quotes, character analysis, themes, and more - everything you need to sharpen your knowledge of What Is the What.

What Is the What Summary & Study Guide Description

What Is the What Summary & Study Guide includes comprehensive information and analysis to help you understand the book. This study guide contains the following sections:

This detailed literature summary also contains Topics for Discussion and a Free Quiz on What Is the What by Dave Eggers.

What is the What is written as an autobiography of Valentino Achak Deng, but authored by the American writer, Dave Eggers. Mixing fictional and non-fictional elements, Eggers tells the story of Valentino's long and arduous journey from his hometown in Southern Sudan to his present home in Atlanta, Georgia in the USA. Valentino suffers hunger and disease as, with thousands of others, he walks through his war-torn country to refugee camps in both Ethiopia and Kenya.

The book opens with Valentino answering his a knock on his apartment door to an African-American woman. She says she wants to use the phone, but moments later, a man appears and forces himself through the door and ties Valentino up while the woman robs the apartment. From this compromised position Valentino tells the reader the first part of his story.

Valentino was born in Southern Sudan in a village called Marial Bai. He speaks of his upbringing with fondness, surrounded by a good family and friends. Compared to many people in the area, he had a privileged background. His father owns a series of shops and is likely to hand them over to Valentino when he retires. However, the Sudanese government renders such plans impossible. In an attempt to oppress the uprising of the rebel army SPLA and bring the whole country under Islamic law, they order the destruction of Southern Sudan villages. The destruction of Valentino's village is brutal, but he manages to escape into the forest and join hundreds of other boys on a walk to Ethiopia.

Back in America, the robbers knock Valentino unconscious. When he wakes up, he is bound and gagged in his own apartment with a young boy named Michael left to guard him. Valentino unsuccessfully tries to reason with the boy, but eventually he falls back into his story, comparing his early life in Sudan to Michael's current life in America.

Valentino begins his walk to Ethiopia. The walk is treacherous in the extreme—wild animals, soldiers and disease threatening his life. As they walk through villages, other children join their group, but just as many die, including Valentino's walking partner, Deng. Valentino reunites with his boyhood friend, William K. They keep each other alive, both experiencing signs of madness and disease, until William K dies just before they reach Ethiopia.

Back in America, Valentino's house mate, Achor Achor, returns from his girlfriend's house. The robbers have now gone, and Achor Achor unties his friend and calls the police. When a policewoman finally arrives, she shows no sign that either she cares about the robbery or that she will take the investigation any further. Disillusioned, Valentino and Achor Achor visit the local hospital. They expect a doctor to see Valentino quickly, but after many hours they are still waiting. During the wait, Valentino continues his story.

They cross the border into Ethiopia and set up a refugee camp in Pinyudo near the Gilo River. More children join their ranks, and the elders organize them into groups. Valentino is head of his group, which he names the 11 because it consists of 11 boys. Slowly the elders build schools and begin to educate the children. Their idea is to develop a new generation of educated Southern Sudanese, who can continue to the fight. The rebel army oversees camp development and honors the refugees with visits and speeches from rebel leaders, most notably the SPLA founder, John Garang. It is not long, though, before the SPLA begin recruiting boys into the army. Valentino is just reaching the age of recruitment when the Ethiopian army drives the refugees away from the area.

The soldiers force the refugees into another treacherous journey into Kenya. In Kenya, they build another refugee camp in Kakuma. Unfortunately, foreign aid is less forthcoming, and they have to survive on one meal a day. Nevertheless, life becomes relatively comfortable. Valentino lives with a family, goes to school, plays basketball and meets his future girlfriend, Tabitha. Valentino is very popular and camp leaders give him a job as youth leader and the opportunity to visit Nairobi. However, when it comes to getting out of Africa and to the promised land of America, the authorities overlook him.

Back in America Valentino decides to give up waiting for a doctor and goes to work. His work mate questions why he looks so beat up, and Valentino's silence prompts him to ask why the Sudanese get into so many fights. In his now downbeat mood, Valentino thinks about his girlfriend Tabitha. They started their romance in Kakuma, but it ended prematurely when Tabitha moved to Seattle and found a new Sudanese boyfriend. When Valentino moved to Atlanta, they got in contact again, and soon afterwards Tabitha broke up with her boyfriend. Her ex-boyfriend became jealous and murdered her.

The authorities finally choose Valentino to immigrate to America. He has his doubts because he wants to see his family again and gets contact with his father. His father tells he must go to America and come back a successful and educated man. In 2001, in the wake of the terrorist attack in New York, Valentino flies to Atlanta.

More summaries and resources for teaching or studying What Is the What.

What Is the What from BookRags. (c)2022 BookRags, Inc. All rights reserved.