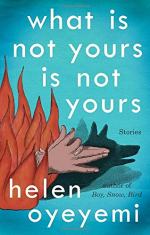 Plot Summary
+Chapters Summary and Analysis
"books and roses"
“‘sorry’ doesn’t sweeten her tea”
"is your blood as red as this?"
"drownings"
"presence"
“a brief history of the homely wench society”
"dornicka and the st. martin's day goose"
“freddy barrandov checks… in?”
“if a book is locked there’s probably a good reason for that don’t you think”
Free Quiz
Characters
Symbols and Symbolism
Settings
Themes and Motifs
Styles
Quotes
Order our What Is Not Yours Is Not Yours Study Guide

Helen Oyeyemi
This Study Guide consists of approximately 48 pages of chapter summaries, quotes, character analysis, themes, and more - everything you need to sharpen your knowledge of What Is Not Yours Is Not Yours.

What Is Not Yours Is Not Yours Summary & Study Guide includes comprehensive information and analysis to help you understand the book. This study guide contains the following sections:

This detailed literature summary also contains Quotes and a Free Quiz on What Is Not Yours Is Not Yours by Helen Oyeyemi.

The following version of this book was used to create this study guide: Oyeyemi, Helen. What Is Not Yours Is Not Yours. New York: Riverhead Books, 2017.

What Is Not Yours is Not Yours, a collection of nine stories by Helen Oyeyemi, opens with the story, “books and roses.” In this story, a small baby is found in Catalonia with a key tied around her neck. As she grows older, the girl, named Montserrat, learns more about her past and about the woman upstairs, a painter and former thief named Señora Lucy. The second story, “’sorry’ doesn't sweeten her tea,” describes the Sharif family from the perspective of father Noor’s boyfriend, Anton. In this story, Noor’s daughters, Aisha and Dayang, are devastated by the discovery that their favorite pop singer has behaved cruelly and violently towards women. The third story, “is your blood as red as this?” takes place in a puppetry school in Vienna. Narrated in part by Radha, who joins the puppetry club after developing a crush on a girl, and Gepetta, Radha’s puppet, “is your blood as red as this?” concludes with the shocking collapse of one of the students, Gustav Grimaldi.

“drownings,” the fourth short story, is about a man named Arkady who resolves to seek revenge on the tyrant of an unspecified country. “presence” tells the story of the marriage between Jacob Wallace and Jill Akkermann, who agree to undertake an experiment designed to reawaken the subconscious to repressed memories. During the experiment, they encounter the child that they could have had and watch their son age before them. In the more lighthearted “a brief history of the homely wench society,” Dayang Sharif joins a group of women at Cambridge University with a decades-old grudge against the all-male Bettencourt Society; Dayang is agonized when she develops feelings for an attractive Bettencourter named Hercules.

The seventh short story, “dornicka and the st. martin’s day goose,” is a modern retelling of Little Red Riding Hood. Dornicka, a woman in her fifties, encounters a wolf-like creature while hiking in the woods and promises to bring the creature some food. Shortly after the encounter, Dornicka develops a lump on her hip, which she cuts off and feeds to a goose—which, in turn, is fed back to the wolf. The eighth short story, “freddy barrandov checks… in?” Freddy Barrandov, Jr. reluctantly agrees to take a job where his parents work at Hotel Glissando. He also agrees to help try to dissolve the relationship between two of his acquaintances, Ched and Tyche. The ninth and final story, “if a book is locked there’s probably a good reason for that don’t you think,” tells the story of Eva, a mysterious and mostly silent young woman who joins an office. Eva also possesses a small, locked diary which, when it is finally opened, horrifies the young man who takes charge of returning it to her.