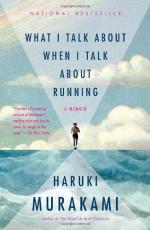 Plot Summary
+Chapters Summary and Analysis
Chapter One: Who's Going to Laugh at Mick Jagger?
Chapter Two: Tips on Becoming a Running Novelist
Chapter Three: Athens in Midsummer - Running 26.2 Miles for the First Time
Chapter Four: Most of What I Know About Writing Fiction I learned by Running Every Day
Chapter Five: Even If I had a Long Ponytail Back Then
Chapter Six: Nobody Pounded the Table Anymore, Nobody Threw Their Cups
Chapter Seven: Autumn in New York
Chapter Eight: 18 Till I Die
Chapter Nine: At Lest He Never Walked
Characters
Objects/Places
Themes
Style
Quotes
Topics for Discussion
Order our What I Talk About When I Talk About Running Study Guide

Haruki Murakami
This Study Guide consists of approximately 22 pages of chapter summaries, quotes, character analysis, themes, and more - everything you need to sharpen your knowledge of What I Talk About When I Talk About Running.

What I Talk About When I Talk About Running Summary & Study Guide includes comprehensive information and analysis to help you understand the book. This study guide contains the following sections:

This detailed literature summary also contains Topics for Discussion on What I Talk About When I Talk About Running by Haruki Murakami.

"What I Talk About When I Talk About Running" is a memoir by Haruki Murakami. Murakami is a successful professional writer and an amateur runner. Murakami was born and raised in Japan, but spent many years in Hawaii and at Harvard University in Cambridge, Massachusetts, as a professor and lecturer.

Murakami was the kind of kid who would be found reading alone in his room while the other kids were playing outside. An intellectual child, he learned a lot from his books but did not learn about sports and team playing, which most of his peers focused on. Murakami was also a loner and felt socially inept in many ways. He married young and forced himself to be more social but it was always a struggle and that private, isolated part of him always lingered. He had the perfect personality for a runner.

Murakami loved the arts including music. He was a huge fan of jazz music and opened up a club outside Tokyo. By the time he was thirty, he had become a success and was able to hire others to run the day-to-day operation of the club. Finally, he was a young man with time on his hands. It was then that he first became interested in running. He had the time and there seemed to be an internal need to condition and challenge his body.

Concurrently, Murakami had the first inkling that he'd like to write, tell stories that other people would like to read. He wrote his first book by hand and sent it off to a publisher without having a copy of it. Fortunately, it came to the publisher's notice and was eventually published. It was followed by other books and soon Murakami was recognized as an outstanding writer.

Murakami saw many parallels between his avocation of running and his pursuit of writing as a career. In order to run and do well in marathons and triathlons, Murakami had to be in the right mindset. He had to have a clear mind and a positive attitude. He had to have been able to vanquish the toxin within him that made him lose confidence and expect and accept defeat. Likewise in writing, Murakami found that he had to be in peak physical condition to begin a writing project. It helped him to have a clear mind and to focus his talent and energy in a way that would produce the successful end product that he strove to create.

Despite the difficult times Murakami experienced in both his career and in his running and conditioning routine and pursuits, he learned to not become discouraged by minor failures, to keep that internal toxic at bay and to forge on. The more he ran, the better runner he became. The more he wrote, the better the writer he became. In the end, however, he felt he would not have been successful in either pursuit without success in the other.