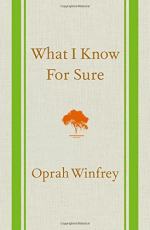 What I Know For Sure - Introduction Summary & Analysis

Oprah Winfrey
This Study Guide consists of approximately 41 pages of chapter summaries, quotes, character analysis, themes, and more - everything you need to sharpen your knowledge of What I Know For Sure.

In 1998, in a live television interview with Gene Siskel, Oprah Winfrey was asked: "What do you know for sure?" (Loc 13). Initially overwhelmed by the question, it has since become a central one in her life. She has explored this question in her monthly column for O Magazine and, just when she thinks she knows nothing, she has a moment of clarity that will bring her back to something she knows "beyond a shadow of a doubt" (Loc 20). This book is a revised collection of those O Magazine columns and reflect the truths Oprah has learned over her life, with the benefits of some revisions. She hopes that readers will reflect on the same central question as they read, as it will help them find themselves.

The introduction establishes the question which unifies the various essays and stories which will appear throughout the book...

More summaries and resources for teaching or studying What I Know For Sure.

What I Know For Sure from BookRags. (c)2023 BookRags, Inc. All rights reserved.