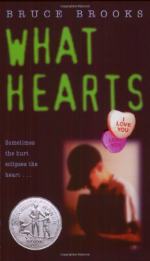 Bruce Brooks
This Study Guide consists of approximately 18 pages of chapter summaries, quotes, character analysis, themes, and more - everything you need to sharpen your knowledge of What Hearts.

What Hearts Summary & Study Guide includes comprehensive information and analysis to help you understand the book. This study guide contains the following sections:

This detailed literature summary also contains Topics for Discussion and a Free Quiz on What Hearts by Bruce Brooks.

What Hearts by Bruce Brooks is the story of a young boy growing up in a world of uncertainty. Asa is only seven when he returns home from school to discover his parents are getting divorced and his mother is taking him from the only home he has known to a new one that includes a new stepfather. Over the next few years Asa's family moves repetitively in part because of the clinical depression that rules his mother's moods. Asa has become quite adept at making friends, but finds he still struggles when it comes to compassion. Asa tries to befriend his stepfather but finds it nearly impossible when his mother finally decides it is time for another divorce. What Hearts is a story of one boy's coming of age, struggling to be the kind of person he believes he ought to be.

Asa leaves school on the last day of first grade with a perfect report card and excitement for the coming summer. However, when Asa arrives at home he discovers that his parents have emptied out their small apartment in preparation for a divorce. Asa travels with his mother to North Carolina where she meets up with Dave, a man who has loved her since high school. Asa is determined to like Dave because he knows it will make his mother happy, but when his enthusiasm leads to irritation for Dave, Asa feels free to hate him.

After dinner, Dave takes Asa and his mother to the boardwalk and puts Asa on a roller coaster to give himself some time alone with Asa's mother. However, Asa panics on the ride and screams until his mother forces the operator to stop the ride. The three of them return to the cabins Dave has rented for them. Asa falls asleep. When he wakes a few hours later, Asa finds his mother gone. Asa sneaks out of the house and returns to the roller coaster and rides it over and over to prove he can.

A few years later Asa begins fourth grade in a new school. Asa quickly makes friends by reading the people around him and figuring out how to act to make friends. A few days later, however, Asa is thrown when he learns that each student is supposed to perform some kind of act in a fundraiser for the school. Asa is teamed with Joel, a simple minded child who is to perform a poem. Asa finds the poem too simple and picks a longer, more difficult poem to perform and he attempts to teach it to Joel, but Joel struggles. Finally Joel's mother calls Asa and tells him that she will arrange for Joel to be out of school the day of the show. However, Joel shows up anyway and Asa is forced to return to the easier poem to save his friendship with Joel.

Another few years pass. Asa finds common ground with his stepfather when they begin playing sports together. Asa pushes Dave to teach him baseball even though Dave knows little about baseball. Asa says he wants to try out for little league. One afternoon Dave becomes irritated with Asa and hits him with the baseball. After that Asa refuses to go out with Dave, but his mother takes his place.

One night Asa wakes to discover his mother has taken an overdose of sleeping pills. Asa helps Dave feed her coffee, but later Asa's mother tries to hurt herself with broken glass. Dave drives Asa's mother into Raleigh to be placed in a hospital once more, ruining Asa's chance at the baseball tryout.

Asa falls in love with a girl in his seventh grade class. Asa tells the girl that he loves her, but that same day learns that he is moving again, for the first time in three years, because his mother has decided to divorce Dave. The next day, the girl tells Asa that she loves him too with a couple of heart shaped candies. However, the girl becomes angry when she learns Asa is leaving. That night, on the way out of town, the car has a flat tire and the family decides to stay one more night together. Asa calls the girl, but she does not even remember his declaration of love.

What Hearts from BookRags. (c)2022 BookRags, Inc. All rights reserved.