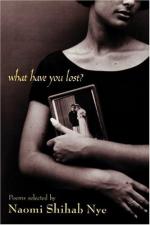 What Have You Lost? Characters

Naomi Shihab Nye
This Study Guide consists of approximately 51 pages of chapter summaries, quotes, character analysis, themes, and more - everything you need to sharpen your knowledge of What Have You Lost?.

What Have You Lost? Summary & Study Guide Description

What Have You Lost? Summary & Study Guide includes comprehensive information and analysis to help you understand the book. This study guide contains the following sections:

This detailed literature summary also contains Topics for Discussion and a Free Quiz on What Have You Lost? by Naomi Shihab Nye.

The first-person narrator is the narrator of nearly three-quarters of the poems in this collection. The narrator uses the pronoun "I," which presumably refers to the poet, and this allows the poet to take possession of their work. In the Introduction, Naomi Shihab Nye writes in the first person as she explains why she compiled this collection of poetry.

In Lisa Ruth Shulman's "Orange Juice," it is dark when her father creeps down the hallway to the refrigerator, and longing to know his sweetness, she rises to meet him, her feet bare on the cold kitchen floor, and listens for clues.

In David Williams' "Breath," his ancestors are thrown away as if they were nothing, and everything they said becomes stone, except for the songs; he is thirsty to join their song.

In "I Myself" by Angel Gonzales, the author comes face to face with himself at a crossroads, but his enemy falls on him, leaving him weak and defeated in a ditch. He could never reach that place so his body walks along, gets lost and distorts whatever plans he makes.

In "Lens" by Kimberly J. Brown, the author wonders about the shouting in the house and why Mom must be watched. Dad tells her to "shut it off" when she claims it will be better when she is dead. Ten years later, Mother makes another attempt. Dad tells the nurse at the emergency room that the cut on her arm happened when she fell from a ladder while cleaning the windows with a razor because she had begged him not to tell. A car motor thrums in the garage, and when she barely pauses to leave, the author wonders if this is her last glance of Mother.

In "Leaving the Light On" by Jack Myers, the author has no idea who his parents are when he returns home late one night, so he climbs an apple tree and peers into their room, listening to them talk like polite strangers who go on as though they have just met.

In "Stranded" by Jenny Browne, the beloved's name drips from the author's eyelashes. She stops pretending because she has been waiting so long, and she thinks of the moment when her beloved decided to keep going.

In "Today I'll Sit Still" by Ernesto Trejo, the author will sit still today and say no to everything, even to "this preposterous accident who speaks of the 'self'" (p. 80).

In "Going Home" by Ben Judson, the author sees the addressee in the airport today, or rather a version from ten years ago, and wonders about the possibility of there being two of them in the world. The girl sits next to him on the airplane, and she is silent and iron-willed like the addressee, though she speaks Spanish. When a man comes to talk to her father, the girl moves into his lap, and a woman the author does not know at all sits in the seat next to him.

In "What Came to Me" by Jane Kenyon, the author takes the last piece of china from the box and grieves for the one she has lost as never before.

In Nuala Archer's "The Lost Glove Is Happy," the author loses her glove made in Taiwan when she is on her way to Lubbock, Texas to visit her mother who is in the midst of desolation. They go to the mall and are as lost as any two mismatched gloves in desolation, but for a few minutes, they relax and are happy.

Many of the poems in this collection are addressed to a second-person "you." Most of these refer to an unspecified person, likely a reader or some person somewhere; however, other times, the authors address a specific person. For example, in "David," the author addresses his dead brother, David, while in "Mother's Day," a mother addresses her children about her desire to be herself.

Some of the poems address someone whom the poet loved, though the person is not identified, including "Seeing For You," "Legend," "Stranded," "This Isn't Fair," Ernesto Cardenal's untitled poem, and "Going Home." "What We Want" addresses a child; "Letter to an Ancestor" is written to an ancestor whom the author found in a census book, and "Sister" and "Raised Voices" refer to the poets' sisters. In "Tough Ride", the author writes to her deceased husband, claiming she is glad he is dead. The author of "Unveiling the Vietnam Memorial" speaks to someone he loved who was killed during the Vietnam War, and the author of "Thinking of What the Jury Is Deliberating" addresses a murderer on trial, likely who killed someone the poet loved. In "I Give You Back," Joy Harjo addresses fear, and Abbot Cutler speaks to Terry Dobson in "Letter to Terry Dobson".

The generic "you" refers to the reader or the author's conception of mankind as a whole. Because this form of addressee is not specified, it could be anyone, anywhere. Some poems that utilize this form of the second person are "The Changeling," "Devotion," "Last-Minute Message for a Time Capsule," "Naming," "The Sparrow and the Crumb," "Other Lives," "The Question," "Any Morning," and "Valencia Street."

Naomi Shihab Nyeappears in What Have You Lost?

Naomi Shihab Nye selects the poems which are included in this collection. She spends years compiling a collection of poems about loss and publishes them in this collection, "What Have You Lost?" She writes the Introduction, as well as "So Far," a poem about lost pets and her desire to retrieve them.

The author's father would disappear into the privacy of stories in his study for hours, and if his son's hands were clean, he might pass a book to his son. Father teaches at the university and appears when his son turns the corner on the seventh floor of the university library. The author forgives his father for their unwritten lives and the years they have not read as they silently pass one another.

The author's mother stares impassively from the picnic table, opposite of the side where her husband serves potato salad. Her high cheekbones and straight black hair make the author think she could be Tecumseh's sister. The pitch of Mother's voice frightens her daughter who still wants to vanish into the woods with her. The author believes Mother could have been Tecumseh's great-granddaughter, and they could have been happy.

Grandfather promised the author his hair would grow back after his first crew cut at the age of five. He unwrapped sourballs for each of them and walked to the woods with his grandson, telling him "these woods are yours. They were mine, but I give them to you. I am old, and it is only right they should now belong to you" (p. 43). Though the author lives most of his life in the absence of his grandfather's gentle voice, he wears his hair long in honor of Grandfather.

A man had less and less to say but said it better and better. He gloated that soon he would have nothing to say and would say it perfectly.

She thought it would not always be like this, that things would be better and less repetitive. She thought the world would be different, and she would be able to enjoy the little things. She hoped they would not all be so needy and there would be times that they would tell her she is the best there is.

Miss Betty showed children how to play hide and seek, covering her eyes while they hid and singing a riddle while she searched for them. When she passes away in a tiny house on the vineyard, the author wonders why he did not look for her sooner.

Palming his cards during the applause, the mentalist smiles but frowns a little too. He shakes his head like something is wrong, seeing the cards already cut and nothing left. He looks around as if to be rid of his gift, willing to wish it on anyone, but he is old news and the audience is already watching the next performer. He sees the taxi waiting, noticing its sprung seat and the battery running low.

Tutu stands on the corner, looking nice. Her grey hair is pinned up in a bun, and a huge, red hibiscus hangs over her right ear. She wears a blue Hawaiian-print muumuu which blows in the wind. She squints and wiggles her nose at a bus' fumes. It is possible to see her shrivel up and shrink a bit more, and soon, she will disappear from the curb forever.

More summaries and resources for teaching or studying What Have You Lost?.

What Have You Lost? from BookRags. (c)2022 BookRags, Inc. All rights reserved.