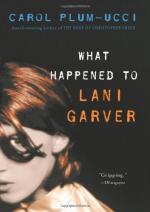 Carol Plum-Ucci
This Study Guide consists of approximately 41 pages of chapter summaries, quotes, character analysis, themes, and more - everything you need to sharpen your knowledge of What Happened to Lani Garver.

What Happened to Lani Garver Summary & Study Guide includes comprehensive information and analysis to help you understand the book. This study guide contains the following sections:

This detailed literature summary also contains Topics for Discussion on What Happened to Lani Garver by Carol Plum-Ucci.

What Happened to Lani Garver is the story of the unlikely friendship between a seventeen-year-old leukemia survivor and the androgynous new kid who moves to town and who just might be a "floating angel."

At the opening of the novel, Claire McKenzie is happy in her life. She's been in leukemia remission for a few years, and has managed to keep her past illness a secret from many of her schoolmates, allowing her to skyrocket in popularity to the cool crowd. Claire has just lost a bunch of weight, secured a spot on the cheerleading squad, and snagged a hot boyfriend from the Fish Frat. Claire's perfect life is rattled by the introduction of a new kid at school, Lani Garver, an androgynous and puzzling teenager. On his first day at school, Claire's best friend Macy boldly approaches him in the hallway demanding to know whether he's a boy or girl. Lani skillfully dodges the question and makes Macy uncomfortable in turn. It's clear that Lani is reaching out for friends, but since Macy doesn't think it would be a good idea to hang out with someone who's obviously gay, then no one is allowed to. It isn't until Claire faints on the school steps and Lani is the only person around to care for her that she starts to reconsider her initial disdain. As it turns out, Lani is nice person, interesting, smart, and intelligent.

Claire and Lani's lives become intertwined when she finds herself confiding in him about her leukemia and her fears that these dizzy spells might be a sign of relapse. Lani, who has spent years living on the streets, knows of a clinic in Philadelphia that can test Claire's blood without informing her parents, and Claire jumps on the opportunity. At the hospital, Claire learns that she is still cancer free, but that she has an eating disorder, which has caused her strange symptoms. From that moment on, Claire realizes that she can confide in Lani in ways she never could with her other friends, yet she feels a need to keep their friendship secret, especially when Lani is accused of coming on to the toughest, most popular guy in school, Tony Clementi. As time passes, Claire realizes that the rumors being passed around about Lani are completely false. In fact, Tony has been harassing and molesting Lani. Unfortunately, no one believes either Lani or Claire and the sexual harassment escalates. Tony begins sending pornographic magazines to Lani's house and calling his phone hundreds of times a day while he's masturbating on the other end. It's clear that Tony is a closeted homosexual using gay bashing to cover up his shame. Tony's abuse toward Lani escalates when it appears that he might "out" Tony, and that Claire knows the truth.

Throughout the novel, Claire has had suspicions that Lani is not entirely human, and may be a "floating angel," an earthly angel that floats from troubled person to troubled person repairing the damage in their lives. At the end of the novel, Tony and his gang of friends kidnap both Claire and Lani, beat them senseless, and throw them in a fishing net at sea. While the rest of the gang doesn't really want to kill anyone, Tony is ferociously reckless. When everyone wants to pull Lani back into the boat, Tony cuts the rope, sending Lani and Claire hurdling into the water. Tangled in the nets, Claire tries to save Lani, but the water is too cold, her lungs screaming for oxygen. In the dark, murky waters, Lani disappears. His body never resurfaces or washes up on shore, yet Claire isn't entirely convinced he's dead. Bags of Lani's belongings went missing from his house, and she can't seem to convince anyone - from Lani's mother to the state police - that he's dead, not just run away. In the end, the decision is left up to the readers to decide, what happened to Lani Garver?

More summaries and resources for teaching or studying What Happened to Lani Garver.

What Happened to Lani Garver from BookRags. (c)2022 BookRags, Inc. All rights reserved.