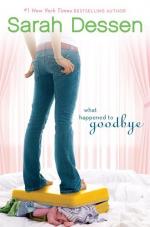 Sarah Dessen
This Study Guide consists of approximately 32 pages of chapter summaries, quotes, character analysis, themes, and more - everything you need to sharpen your knowledge of What Happened to Goodbye.

What Happened to Goodbye Summary & Study Guide includes comprehensive information and analysis to help you understand the book. This study guide contains the following sections:

This detailed literature summary also contains Topics for Discussion and a Free Quiz on What Happened to Goodbye by Sarah Dessen.

What Happened to Goodbye by Sarah Dessen tells the story of a teenage girl named Mclean Elizabeth Sweet who lives with her father after a divorce. Since her father is a restaurant consultant, the pair constantly moves around. As they settle into the town of Lakeview, Mclean realizes that she is happy there, but she knows she probably won't stay.

In every town Mclean and her father move to, Mclean creates a new identity. She uses a form of her name and creates a persona. She's not sure which person she really is. When she moves to Lakeview, she finds herself using her real name for the first time. Mclean makes new friends and settles in, but all the while she is aware that she will most likely have to move on soon. Mclean is particularly drawn to the boy who lives next door. He's a genius who is trying to live a "normal" life. She also meets a girl who is considered an outcast by others. When Mclean befriends her, she finds there are many amazing facets of the girl's personality and experiences that Mclean appreciates. Since Mclean is friends with others, they, too, begin to get to know the other girl, showing a growth in acceptance and friendship.

As she tries to adjust to this new life, Mclean is struggling with her relationship with her mother. The three had been a tight-knit family until the mother met another man, who she eventually married. Now in addition to a new father, who happens to be famous in the world of basketball, Mclean also has young twin siblings. She doesn't understand where she fits in her mother's world and turns her back on her mother when her mother tries to reach out to her.

In desperation to see her daughter, the mother tries to gain custody of her, and this forces Mclean into a compromise position where she is forced to see her mother more. As she spends more time with her, and as she sees and appreciates the different lives of her new friends and their families, Mclean begins to realize how much she misses her mother and also begins to see how much her mother truly loves her.

Mclean knows that the restaurant her father is working with is really struggling, and she finds out he has to break the news that it is going to be shut down. It seems as if her world is falling apart. This time she actually cares about the people in the restaurant and has a connection with them and the town. As she struggles with her own identity and her feelings for her new friends, her new friends discover her past identities. She runs away to a place with happy memories. As she is crashing, her mother and father show up, tipped off to her whereabouts by the boy who asked her to be his girlfriend. Her parents realize how much she has been struggling and offer her the love and support she needs.

Everyone works together to work on relationships and work and school issues, and Mclean finds out who she really is.

More summaries and resources for teaching or studying What Happened to Goodbye.

What Happened to Goodbye from BookRags. (c)2022 BookRags, Inc. All rights reserved.