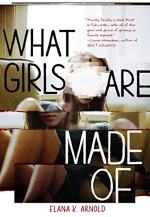 What Girls Are Made of Summary & Study Guide

Elana K. Arnold
This Study Guide consists of approximately 48 pages of chapter summaries, quotes, character analysis, themes, and more - everything you need to sharpen your knowledge of What Girls Are Made of.

What Girls Are Made of Summary & Study Guide Description

What Girls Are Made of Summary & Study Guide includes comprehensive information and analysis to help you understand the book. This study guide contains the following sections:

This detailed literature summary also contains Quotes and a Free Quiz on What Girls Are Made of by Elana K. Arnold.

The following version of this book was used to create this study guide: Arnold, Elana K. What Girls Are Made Of. Carolrhoda Lab, 2017. Hardcover.

What Girls Are Made Of opens with Nina’s mother telling her there is no such thing as unconditional love. For women, she says, love is always conditional upon sex and beauty. At just fourteen years old, Nina takes this lesson to heart.

The next section appears in a different font, indicating the first in a series of break narrative sections which will span the entire book. Many of these sections are written in the style of magic realism. This first one is full of imagery and metaphor about chickens and eggs and symbols of fertility and femininity.

At sixteen, Nina goes to Planned Parenthood for the birth control pill because she and her boyfriend Seth are sexually active. Nina is willingly complicit in the conditions of Seth’s love for her. These conditions are that they have sex, that Nina plays hard to get, and that they never discuss their classmate Apollonia Corado and what happened the previous winter. Nina is consumed by her relationship with Seth. Although she knows her life shouldn’t revolve so much around a boy, she can’t help herself and her desire for him overwhelms her.

A break narrative section tells the story of a girl whose house is made of birds. Eventually, the birds consume her.

As penance for an unknown crime or misdemeanor, Nina is mandated to volunteer at an animal shelter. There she sees the reality of abandoned dogs who are euthanized and learns what qualities are conducive to love.

On a Saturday morning, Seth and Nina go on a long hike to a bridge where people are bungee jumping. Seth asks Nina is she would jump with him. She feels as though he is testing her and looking for a specific answer. She hesitates and backpedals, not knowing how to respond, but also knowing intuitively that she has failed to give him the answer he wants. On their hike back to their car, she feels a distance between them. Nina loves Seth deeply. She wants “to serve him” and “paralyze him so he won’t go away” (58).

A break narrative section introduces the first of several similar stories about virgin martyr saints. In this one, Philomena rejects the advances of an Emperor who tortures her and murders her. She lives happily ever after in heaven.

Part Two flashes back to when Nina is fourteen and she and her mother travel to Italy. There she learns about the connection between sex and death. She also learns that her father was married when he met her mother. Her mother emphasizes the importance of paying attention to men so that they don’t wander away.

Back in the present day, readers learn that the break narrative sections are stories written by Nina for an English project. It is Thanksgiving and Nina discovers she is pregnant. She returns to Planned Parenthood and she chooses to have a medical abortion at home while her parents are out of town. She asks her friend Bekah from the animal shelter to come and stay with her. By the end of the weekend, Nina is no longer pregnant. Nina feels that the “abortion was the kindest, best thing” she has done for herself in as long as she can remember (126). Back at school, she learns that Seth and Apollonia have gotten back together.

Part Three returns to Nina’s trip to Italy where she sees an art exhibit of dissected female sculptures. A break narrative section tells the story of Saint Agatha which parallels the earlier break narrative story of Philomena. The next section is a flashback to when Nina and Louise are twelve-years old. Louise’s older brother regularly makes rude or sexuality explicit comments about the girls and their bodies. One morning after a sleepover while Louise is still in bed, Nina hangs out with her brother and his friend. Through them, she first hears about Wishbone Dolls which are made, and can even be custom ordered, as sex toys. A break narrative section describes a broken doll woman who arrived in a box and must be repaired by a craftsman.

In Part Four, fourteen-year-old Nina and her mother visit one last Italian museum: the Museum of Torture. The next break narrative section depicts a bird-girl who is ashamed of her appearance but who begins to pluck out her feathers and uses them to start writing.

In the present-day narrative, Nina drives to Apollonia’s house where her birthday party is taking place. She waits until the party breaks up and Seth leaves. She follows him home. In front of his house, he explains that he broke up with her because he could no longer keep ignoring what she did to Appolonia the previous year.

Nina returns to the shelter for an extra volunteer shift. She breaks down in tears and allows her supervisor, Ruth, to comfort her. They begin discussing the idea of unconditional love and Ruth cautions against that kind of one-sided, servile devotion. In a break narrative, Nina asks what would happen if women choose not to be beautiful and servile. She wonders who they would be, when freed of conditions.

Back at school on Monday, Nina runs into Apollonia in the washroom and apologizes. She is not forgiven, but Apollonia accepts the packet of Nina’s stories that she offers her. At home, Nina’s mother denies ever having told her that there is no such thing as unconditional love.

Nina goes to visit Bekah who tells her that there are more important things in life, like service. Bekah advocates doing good, instead of waiting around for someone else to make you feel good. Nina reflects on the possible ways she could be of service. A few days later, Nina packs her own supplies and goes for a hike alone. She is self-sufficient, she knows she is more than any of her parts, and she is determined to be more than her mother’s daughter.

The Author’s Note at the end of the book explains some of the writer’s motivation for telling this story and offers additional takeaways for readers, particularly young women.

More summaries and resources for teaching or studying What Girls Are Made of.

What Girls Are Made of from BookRags. (c)2022 BookRags, Inc. All rights reserved.