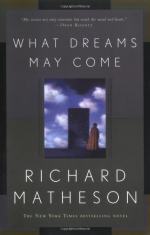 What Dreams May Come: A Novel Summary & Study Guide

Richard Matheson
This Study Guide consists of approximately 39 pages of chapter summaries, quotes, character analysis, themes, and more - everything you need to sharpen your knowledge of What Dreams May Come.

What Dreams May Come: A Novel Summary & Study Guide Description

What Dreams May Come: A Novel Summary & Study Guide includes comprehensive information and analysis to help you understand the book. This study guide contains the following sections:

This detailed literature summary also contains Topics for Discussion and a Free Quiz on What Dreams May Come: A Novel by Richard Matheson.

What Dreams May Come beings with the prologue where Robert Nielsen relates his experience of a psychic who comes to his door claiming to have a manuscript that she has transcribed from his dead brother, Chris Nielsen. She tells Robert that Chris dictated the manuscript and refused to give her any rest until the project was done. All she wishes to do is deliver the manuscript to Robert and finally get some peace. The remainder of the book is made up of this manuscript.

Chris Nielsen dies in a car accident one night after going to a movie. As a screenplay writer, he considers his research to be watching movies. Usually his son, Ian, accompanies him, but his night he is alone. Chris's spirit leaves his body and wanders around Borderland, removed from life and yet not moving on. He is unable to leave his wife, Ann. Her grief at his death is his pain and he wishes to be able to help her. After several attempts at reaching his family, Chris finally prays for help, and is immediately removed from Borderland.

Summerland is where Chris now finds himself. He is greeted by his cousin, Albert, and his dog, Katie. Albert helps Chris to understand that he is dead, though he still has his body and his thoughts that are uniquely his. Albert also explains that the afterlife is a state of mind, and can be whatever an individual wishes it could be. Those who live in Summerland have occupations, but not for the purpose of making a living, but because of their passion for a particular type of work. Chris enjoys Summerland, but cannot get Ann out of his mind. The recurring dreams of her death frighten Chris, and actually are a portent of what eventually happens when Ann takes her own life. Chris is greatly frustrated. He has just learned that Ann would have joined him in twenty-four years, and now she is consigned to a lower realm for that period of time.

Chris cannot stand by and just wait for his love to endure twenty-four years of a realm of Hell. He convinces Albert to help him search the Lower Realms to find Ann so that he can help her. As with Virgil's descent into Dante's Inferno, Chris is exposed to a number of mind-numbing sights that are repellent and abhorrent. He is actually attacked by some of the inhabitants, and he believes that he will die, though he is already dead. He learns later that the attack was perpetrated through the minds of the inhabitants and his own mind. Albert and Chris do finally locate Ann in her house, which is a replica of their home, only this one is in very poor condition, the atmosphere depressing and dark. Ann does not recognize Chris, though he tries everything he can to convince her of his identity. Ann's mind has created her own version of Hell; her afterlife is a continuation of the state of mind she found herself in after Chris's death.

The only thing Chris can now do is to choose to stay with Ann in her Hell because he simply cannot walk away from her. He knows that there is a better way, and hopes that with time he will be able to convince her of this. With this sacrifice, Chris sees that Ann finally understands who he is, but he then loses consciousness and wakes up in Summerland again. Ann has chosen rebirth as a way to redevelop her injured spirit. Chris determines, yet again, that he must join her and insists on learning about rebirth so that he can experience it immediately, rather than in a few hundred years. As Chris learns about this, he realizes that he and Ann are soul mates and have had several previous lives together. Thus encouraged, Chris tells Robert how he plans to be reborn, and that once he does his incarnation as Chris will leave his earthly memory. That is why Chris insisted that the manuscript be written in such a rush, because Chris is in a hurry to get back to Ann. The message for the readers of the manuscript is that spiritual growth is the purpose of life, and a life of service to others is the utmost good; that death is nothing to fear because it is merely a continuation of one's existence on a new level.

More summaries and resources for teaching or studying What Dreams May Come: A Novel.

What Dreams May Come: A Novel from BookRags. (c)2022 BookRags, Inc. All rights reserved.