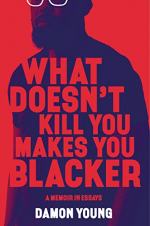 What Doesn't Kill You Makes You Blacker Summary & Study Guide

Damon Young
This Study Guide consists of approximately 74 pages of chapter summaries, quotes, character analysis, themes, and more - everything you need to sharpen your knowledge of What Doesn't Kill You Makes You Blacker.

What Doesn't Kill You Makes You Blacker Summary & Study Guide includes comprehensive information and analysis to help you understand the book. This study guide contains the following sections:

This detailed literature summary also contains Topics for Discussion on What Doesn't Kill You Makes You Blacker by Damon Young.

The following version of this book was used to create this study guide: Young, Damon. What Doesn’t Kill You Makes You Blacker. HarperCollins, 2019.

In first-person narration, the author blends aspects of essay-like contemplation of particular issues with memoir-like experiences of those same issues to create a sometimes angry, sometimes darkly humorous picture of what it is like to be a black person in America. The use of the terms “nigger” and “nigga” throughout this analysis is reflective of the frequency and context of the usage of both terms throughout the book.

The book begins with an Introduction, in which the author offers commentary and analysis on the nature of white privilege, doing so in relation to his own experiences of having none of the privileges associated with what he calls “whiteness”. That term, that concept, appears throughout the book, as the author contemplates both his own experience of “blackness” and his personal insecurities. Also in the Introduction, he considers the relationship between both those experiences, wondering where the lines are between these two main aspects of his life and identity. That consideration likewise continues throughout the book.

With Chapter 1, the author begins his essay-by-essay, chapter-by-chapter consideration of different aspects of being black in America. Several of those considerations are defined by perspectives on language – for example, the difference between “nigga” and “nigger,” which the author highlights in the first chapter and returns to in several different contexts throughout the book as a whole. In Chapter 2, the author shifts focus somewhat, and begins another book-long consideration – the difference and the tension between how black people see themselves and each other, and the relationship of such perceptions to how whiteness and white people see blackness and black people.

Other chapters shift the emphasis to the more personal, the more memoir-like sides of the narrative. In Chapters 6, 9, 10, and 11, the author puts his focus on aspects of his own personality and identity. In particular, he focuses on aspects of his personal insecurity, continuing the process begun earlier of trying to unravel the knot of tensions at the heart of being both black and a non-stereotypical male in early 21st Century America. Chapters 4 and 13 take his considerations even further into the personal, as the focuses on his relationship with his mother Vivienne, and what her life was like as a black woman in America. In Chapters 12 and 16, he continues his personal explorations by focusing on his relationships with the woman who became his wife, Alecia, and the daughter they brought into their family, Zoe.

More summaries and resources for teaching or studying What Doesn't Kill You Makes You Blacker.

What Doesn't Kill You Makes You Blacker from BookRags. (c)2022 BookRags, Inc. All rights reserved.