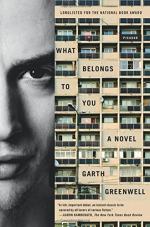 Related Topics
What Belongs to You: A Novel
Cleanness

What Belongs to You Summary & Study Guide

Garth Greenwell
This Study Guide consists of approximately 51 pages of chapter summaries, quotes, character analysis, themes, and more - everything you need to sharpen your knowledge of What Belongs to You.

What Belongs to You Summary & Study Guide Description

What Belongs to You Summary & Study Guide includes comprehensive information and analysis to help you understand the book. This study guide contains the following sections:

This detailed literature summary also contains Quotes and a Free Quiz on What Belongs to You by Garth Greenwell.

The following version of this book was used to create this study guide: Greenwell, Garth. What Belongs to You. Farrar, Straus and Giroux. 2016. First edition. The story is told from the first-person perspective of an unnamed narrator, a teacher at a prestigious English-language school in Sofia, the capital of Bulgaria.

The book begins with the narrator’s description of his first encounter with Mitko – in a public washroom known to be a meeting place for gay men seeking anonymous sexual satisfaction. The first encounter between the narrator and Mitko is essentially a financial transaction: Mitko insists upon being paid, and the narrator, as he describes it, is so strongly attracted to him that, against his better judgment, he pays. Over the weeks and months that follow, the relationship continues to be a financial one, one fueled and defined by the narrator’s increasing desire for Mitko’s body and his company. The first phase of the relationship ends when a trip to a seaside town ends in a violent confrontation, and the narrator’s sending Mitko away from the hotel where they had been staying.

At that point, the narrative shifts focus. In a long, single paragraph, the narrator describes his complicated relationship with his family. He writes about a conversation with his sister, who reveals their family’s history of reckless sexuality and emotional violence; about his early experiments with, and discoveries of, his same-sex orientation; and the eventual rejection he faced at the hands of his homophobic father.

The book then returns its focus to the narrator’s relationship with Mitko, who returns years after the apparent end of their relationship to tell the narrator that he (Mitko) has contracted syphilis, and that he (the narrator) should get tested. The narrator then describes an awkward conversation with his new boyfriend, who is initially calm, then upset, then calm and practical again. The narrator goes to a clinic and gets tested, discovering that he is positive and that he has to travel to another part of the city to get treatment. His trip brings him a number of surprises, both pleasant and unpleasant. In terms of the latter, he has unpleasant encounters with judgmental medical staff; learns that he will not be able to get the kind of treatment he needs; and, as a result of receiving this latter piece of information, learns that Mitko has again been lying to him. When he returns home, conversations with both his boyfriend and with Mitko lead to the narrator ending their relationship yet again.

At this point, the narrative shifts focus again, telling the story of a trip the narrator took with his mother when she came to Bulgaria for a visit some time after the relationship with Mitko finally ended. That trip, the narrator says, was primarily about a reconciliation between himself and his mother, their having been estranged for several years. On that trip, he writes, they encountered a boy traveling with his grandmother, the boy reminding the narrator of Mitko in several ways, and also making him re-think his opinions about him.

The novel concludes with a description of the narrator’s final encounter with Mitko who, in the final stages of some kind of illness, visits the narrator and essentially mourns what has become of his life. The narrator feeds him, comforts him, and then sends him on his way, watching as a young couple remove their child to their home so that Mitko cannot spend too much time with it. The novel ends with the narrator watching Mitko walk away until he disappears, and then sitting on his couch, his head in his hands.

More summaries and resources for teaching or studying What Belongs to You.

What Belongs to You from BookRags. (c)2022 BookRags, Inc. All rights reserved.