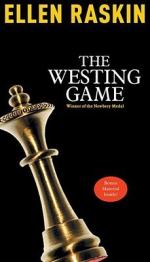 A mysterious industrialist who disappeared thirteen years ago. He was the child of immigrant parents; Westing was orphaned at the age of twelve and self-educated. He saved his wages and bought a small paper mill; from this small beginning, he built the giant Westing Paper Products Corporation. He also founded the city of Westingtown. A clever and dedicated gamesman, he excelled at chess. He was known for his extravagant Fourth of July celebrations and the elaborate costumes he wore. His only daughter, Violet, drowned just before her wedding; his wife deserted him two years later. He never remarried and disappeared from sight after a near-fatal car accident. His estate is estimated to be over two hundred million dollars.

Although only a junior-high-school student, thirteen-year-old Turtle is a whiz at the stock market. The daughter of Dr. and Mrs. Wexler, Turtle wears a single, long...