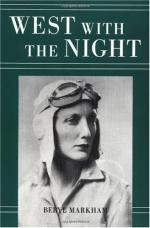 Beryl Markham
This Study Guide consists of approximately 35 pages of chapter summaries, quotes, character analysis, themes, and more - everything you need to sharpen your knowledge of West with the Night.

West with the Night Summary & Study Guide includes comprehensive information and analysis to help you understand the book. This study guide contains the following sections:

This detailed literature summary also contains Topics for Discussion and a Free Quiz on West with the Night by Beryl Markham.

West with the Night is a memoir of Beryl Markham, horse trainer, bush pilot, and history making aviatrix. Beryl Markham grew up in the wilds of Africa where her father raised racehorses on their farm. Beryl followed in her father's footsteps by becoming the first woman in Africa to receive her horse-training license. Fascinated with the talents of her friend, Tom Black, Beryl learned to fly and went on to become the first person to fly east to west across the Atlantic from London to North America. Although her flight ended in Nova Scotia rather than the intended New York, Beryl will always be known for her courage and her groundbreaking talents.

While searching for a fellow pilot after his plane disappeared in flight, Beryl ran into an old friend from her childhood who reminded her of their shared past. A lion once attacked Beryl. The lion was the pet of a neighbor she and her father regularly visited when she was a small child. One day, Beryl was running through the farm, intent on some berries she knew were ripe and ready to be picked, when the lion tried to make her a meal. Beryl suffered bites on her legs and back, but survived the ordeal. The lion was caught and caged for the rest of its life until the owners were eventually forced to put the animal to death.

Beryl grew up among the native peoples of Africa, spending time hunting with a local tribe as though she were one of their own. On one such hunt, Beryl was separated from the tribal men while attempted to save her dog from a warthog. Although Beryl was able to kill the hog with her spear, the dog was viciously injured and required a long recovery period. Beryl also grew up with horses, spending much of her time helping her father train and care for the race horses on their farm. One such horse frequently fought Beryl's affections, throwing her to the ground and biting her. However, Beryl eventually won over the horse and discovered that when no one was looking, the horse would serve as her protector. Years later, Beryl's father gave her a colt she helped deliver, an act that initiated her solo career as a horse trainer.

After Beryl's father lost his farm due to a drought, Beryl moved on to Molo to establish herself as a trainer. While struggling to convince local horse owners that a young woman such as herself could train a spirited race horse, Beryl met the man who would change her life, Tom Black, and one of her horses miraculously won one of the most prestigious races in the area. It was not until a few years later when Beryl met Tom Black again that he began to teach her how to fly. During this time, a good friend of Beryl's suggested that it might be possible to track elephant herds by plane for safari parties. After this friend was killed in a flying accident, Beryl took his suggestion and began to scout elephant herds for safaris as well as flying mail, passengers, and supplies around the wilds of Africa.

After Tom moved back to England and won the International Air Race, Beryl decided she, too, would like to move to England. Beryl flew the six thousand mile journey with her friend, Blix, suffering dozens of delays all through Africa due to the Italian government's tight reign on security in their territories along the African coast. Once in England, Beryl accepted a bet from a friend to be the first person to fly from London to New York, in an east-west direction. A special plane was designed and built for the flight and Beryl took off on September 4, 1936. Beryl made it to within hours of her goal when the fuel line to her last remaining fuel tank froze and she was forced to make a crash landing in Nova Scotia. Although to Beryl the flight was not successful, she became a hero to many in her native country. Armed with the proof of her success, Beryl returned to Africa to share her glory with her father.

More summaries and resources for teaching or studying West with the Night.

West with the Night from BookRags. (c)2022 BookRags, Inc. All rights reserved.