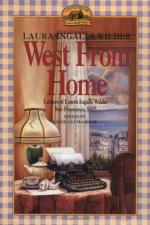 Laura Ingalls Wilder
This Study Guide consists of approximately 25 pages of chapter summaries, quotes, character analysis, themes, and more - everything you need to sharpen your knowledge of West from Home.

"West from Home: Letters of Laura Ingalls Wilder to Almanzo Wilder, San Francisco 1915" is a nonfiction work comprised of 124 pages. The book is a series of letters from Laura Ingalls Wilder to her husband, Almanzo "Manly" Wilder as she traveled from Missouri to San Francisco in 1915 to visit their only daughter, Rose Wilder Lane. Rose was at the time a writer and editor for The Bulletin, a San Francisco newspaper. Rose was also busy writing the biography of Henry Ford.

Although Laura was born into a struggling pioneer family, she had the heart of a traveler. For Laura the decision to leave Rocky Ridge Farm, the Wilders' fruit and dairy farm in Mansfield, Missouri, was at the same time difficult and simple. Laura wanted to see San Francisco, Rose and the Pacific Ocean as desperately as Rose wanted her to see those things. On the other hand, leaving Almanzo to tend to the farm could prove to be a tremendous strain, both physically and financially. In the end, Rose offered to pay Laura for the potential loss of income from the Wilders' chickens while she stayed in San Francisco for two months.

Laura was vigilant in writing letters along every leg of the trip. In the letters, she expressed concern for Almanzo and the family dog, Inky, while explaining everything she saw from the window of the train as it passed through the Midwest and into the West. After boarding in Springfield, Missouri, Laura had stops in Denver, Ogden, and Kansas City. The trip proved to be grueling and difficult for Laura, who at the time was forty-eight years old.

The letters to Almonzo explained in detail everything Laura encounters on her trip, from the people on the train to the sights and sounds outside the window of her car. There are humorous stories, as well as complaints of being exhausted and uncomfortable. Along the way Laura shares that she's met quite a few nice people who have been helpful in some way.

There is a sense of relief when Laura finally arrives in Francisco. During Laura's stay, she is delighted with the plethora of sights and sounds that San Francisco has to offer. Among these are the Golden Gate Bridge, the Pacific Ocean, Russian Hill, the World's Fair, and Panama Pacific International Exposition. The Panama Pacific International Exposition was held to commemorate the Panama Canal's completion as well as the four hundredth anniversary of the discovery of the Pacific Ocean. San Francisco, the Pacific Ocean and the PPIE were all magnificent sights to behold particularly for a girl who had grown up in the Midwest and resided in Missouri.

The book ends with a letter to Almanzo, dated October 22, 1915, in which Laura talks about preparations for the long journey home.

More summaries and resources for teaching or studying West from Home: Letters of Laura Ingalls Wilder to Almanzo Wilder.