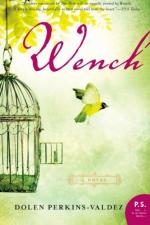 Dolen Perkins-Valdez
This Study Guide consists of approximately 55 pages of chapter summaries, quotes, character analysis, themes, and more - everything you need to sharpen your knowledge of Wench.

This detailed literature summary also contains Topics for Discussion and a Free Quiz on Wench by Dolen Perkins-Valdez.

Wench revolves around the lives of four Southern slave women who act as mistresses to their masters during the four years of summers when they visit the Tawawa House Resort in the Northern free state of Ohio. Lizzie, Sweet, and Reenie are regulars who have known each other for years, but with the arrival of a new slave, Mawu, as wild as her bright red hair, starts talking about escape, the lives of the four women change forever.

Lizzie, Reenie, Sweet, and Mawu meet at the Tawawa House Resort in Ohio where they "vacation" each summer with their masters. When the slave women first meet Mawu, they are intrigued by her bold personality, her unique appearance, and her absolute fearlessness. Mawu is desperate to run away from her cruel master, Tip, and will stop at nothing to earn her freedom. The prospect of freedom is an exciting one to the other slaves, but they have never thought about running away. The three other slave women enjoy the perks of being mistresses to their masters, including good food, an easier work load, and even education (for some). They know that if they were ever caught trying to run away, or even talking about it, they would be beaten, sold-off to cruel masters, or even killed. Additionally, many of the women have children who also enjoyed an elevated status on their plantations, and they would never want to endanger their children, let alone be separated from them.

But Mawu is different. Her situation is far worse than the other women's and she will stop at nothing to be free from Tip. In the first summer at the Tawawa House, Mawu runs through the woods to a resort for free blacks. There, she meets with some people who give her information, even a map of safe houses of abolitionists who could help her escape to New York. She tries to convince the other mistresses to run away with her, but they are all too afraid to leave their masters. Fearing that Mawu will be caught and killed, she tells her master, Drayle, of Mawu's escape plan, entrusting that he will be discreet with the information, but will somehow stop Mawu from leaving Tip. She is horrified when Tip pulls Mawu out into the courtyard of the resort to beat and sodomize her, until she is unconscious and bleeding, in front of everyone, but particularly in front of the slaves as a warning - if anyone tries to escape, he will do this to them, or worse. This event changes Lizzie's relationship with her friends forever. Although Mawu no longer trusts Lizzie, it is clear that Tip will never beat her determination to reach freedom out of her.

The next summer, Lizzie is shocked to see that Tip has once again brought Mawu to the resort, despite her escape plan from the previous summer. Mawu and the rest of the mistresses are cool and mistrusting of Lizzie, which pains her. She begins sneaking away to spend more time with Glory, the white abolitionist woman, despite the fact that Glory's husband is fearful of being caught with a black woman in his house. When Glory gives Lizzie abolition pamphlets to read aloud to the other slaves, they begin to accept her again, but it is unknown how much they trust her. The summer takes a terrible turn when Sweet, who lost the baby she was carrying the summer before, learns that cholera has struck her home plantation. One by one she receives news that each of children has died. She loses her mind, and eventually dies. Sweet's death seems to change the mindset of the rest of the slaves, and even Lizzie considers running toward freedom, but she is always drawn back by her love for Drayle. One evening, a fire erupts in Mawu's cabin. The slaves run to put out the blaze and find Mawu, arms burnt into white blisters, crying and repeating the phrase "I tried." No one is sure what she means - did she try to save Tip from the fire and fail? - but then Lizzie realizes that Mawu had tried to kill Tip and failed. During the chaos of trying to put out the fire, Reenie takes Lizzie back to her cabin to clean up her injuries. By morning, they are gone. They have clearly taken their opportunity to run toward freedom. Lizzie doesn't hear anything else about the women until the following summer when Glory takes her to Mawu's hideout in the woods. Mawu has been waiting for Lizzie all these months, refusing to run toward freedom without her. Reenie has made it to New York where she is working as a freed black, but Mawu knew she couldn't leave Lizzie behind. Mawu's dedicated and dangerous love for Lizzie validates something in her mind, but when the time comes, Lizzie still can't leave Drayle. When Mawu tries to run, after all these months of waiting, she is caught by slave catchers on her second night and returned to Tip, presumably to be tortured and possibly even killed.

More summaries and resources for teaching or studying Wench.