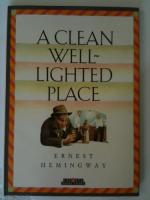 This story begins in a café. It is late at night and the café's two waiters are watching their last customer, an old man. The old man, who is deaf, is a regular customer who tends to leave without paying his bill when he drinks too much. The two waiters suspect he is already drunk and so they keep a close watch on him.

As they watch, they discuss the old man's recent suicide attempt. One waiter comments that the man's despair could not have been over money, since he seemed to have plenty. As they talk, the waiters notice a soldier and a young woman pass by and they comment on the fact that the soldier is likely breaking curfew.

When the old man indicates he wants another drink, the waiter protests, saying he is already drunk. The old...