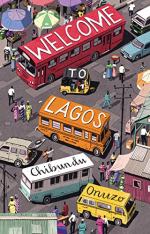 This detailed literature summary also contains Quotes and a Free Quiz on Welcome to Lagos by Chibundu Onuzo.

The following version of this book was used to create this study guide: Onuzo, Chibundu. Welcome to Lagos. New York: Catapult, 2018.

The novel begins in the Nigerian Delta, where an officer in the Nigerian Army named Chike Ameobi and his fellow soldier Yęmi Ọkẹ deserted their post after being ordered to burn down a village full of civilians. Making their way to the city of Yenagoa, Chike and Yęmi encountered two young people, a member of a nearby militant group named Fineboy, and a teenage girl named Isoken who had been separated from her parents. She claimed that Fineboy's fellow guerrilla soldiers had attempted to rape her, but he swore he was not involved. The ragtag group continued on together to Yenagoa, and then to Lagos. On the bus to Lagos, Chike met Oma, a woman who had just left her abusive husband.

Meanwhile, in Lagos, Ahmed Bakare, the founder and senior editor of the Nigerian Journal told his staff about the recently burned village in the Delta and reflected on the failing state of his newspaper. In Abuja, Nigeria's capital, the Minister of Education, Chief Ręmi Sandayọ, was informed by the president that a new fund was established for his department. Sandayọ was later told by a colleague that he was either going to be fired from his position or placed in another ministry. He decided to leave Abuja and return home to Lagos.

In Lagos, Chike and Yęmi found jobs directing traffic at a crosswalk, but the group still lacked funds and ended up living under a bridge with other transients. Fineboy told his new friends he fantasized about being a radio DJ, and Oma and Isoken bonded over their mutual experience of violence at the hands of men. Fineboy discovered a vacant, fully-furnished apartment and brought the group there to live, but after several nights, they were surprised by the apartment's owner - Ręmi Sandayọ. Having read in the newspaper that Sandayọ had fled Abuja with the money from the new fund for the Ministry of Education, the group tried to decide what to do with him and with his money.

Chike suggested they give the money away to the local schools, as that was what it was intended for, and the others agreed. He and Isoken began visiting the schools and inquiring about the supplies they needed. Sandayọ told Fineboy that the militants with whom he had previously been traveling were being bribed by the president. Disturbed by this information, Fineboy went to the office of the Nigerian Journal and told Ahmed that he knew where Sandayọ was, suggesting that he come to the apartment for an interview. Ahmed agreed, and during the interview, Sandayọ accused several high-ranking government officials of corruption and bribery, including the first lady. Immediately after publishing the interview, the office of the Nigerian Journal was burned down. Ahmed called his father (a wealthy former secretary for the Ministry of Petroleum) and informed him of these developments, and his father bought him an airline ticket to London. Sandayọ began visiting the schools with Chike.

Ahmed flew to London, where he went to college, and arrived at his parents' flat. He got in touch with a friend from college, Farida, who worked for the BBC, and told her about Sandayọ. She asked Ahmed to convince Sandayọ to do an interview with the BBC, and he agreed. Back in Sandayọ's apartment, Chike and Oma began a romance. After speaking with Farida, Sandayọ was interviewed by two BBC correspondents. During this conversation, Sandayọ took credit for much of the group's work improving the schools. Sandayọ suggested the crew visit the schools themselves and talk to the principals for verification. Afterwards, Chike was furious, both because Sandayọ lied about his involvement in their improvement projects, and also because he put the principals at risk by disclosing their identities.

The interview aired, and Chike's fears proved prescient, as shortly thereafter he received a text message informing him that the principals had been arrested. Yęmi, distraught about the situation in the apartment, went sightseeing and discovered a quaint village built over a river called Makoko. In London, Ahmed took Farida out to dinner, and afterwards they learned of the arrests of the principals. In the middle of the night, Sandayọ left money for Chike and the others, and attempted to sneak out of the apartment; Chike woke up, but let him leave. After walking several blocks, Sandayọ heard the sound of police sirens and, realizing they were headed for the apartment, turned back. Seeing the others about to be arrested, he offered a bribe to the police chief in exchange for their release. The bribe was accepted and Sandayọ was taken to jail. Ahmed called his father and asked him to shelter the group temporarily at his home. A famous Nigerian-British singer went on television and sang a song about Sandayọ, bringing international attention to his imprisonment. After global protests, Sandayọ was released from jail, however, on his way home, he was pulled from his car and beaten to death.

Chike and the others grieved for Sandayọ. Ahmed's parents offered to pay for Isoken to attend college, and she accepted. The others, Chike, Yemi, Oma, and Fineboy move to Makoko together. Oma and Chike lived together as romantic partners. Ahmed asked Farida to marry him, and it is implied that she said yes.