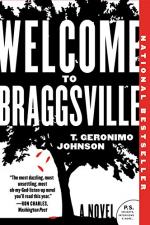 T. Geronimo Johnson
This Study Guide consists of approximately 76 pages of chapter summaries, quotes, character analysis, themes, and more - everything you need to sharpen your knowledge of Welcome to Braggsville.

This detailed literature summary also contains Quotes and a Free Quiz on Welcome to Braggsville by T. Geronimo Johnson.

NOTE: The main character's name is spelled as both D'aron and Daron in the book. This study guide attempts to follow the author's change in spelling throughout the story.

In the novel “Welcome to Braggsville” by T. Geronimo Johnson, college student D’aron Davenport learned that things were never as they seemed. D’aron had grown up in the small southern town of Braggsville. He knew his town was backward but never dreamed how strange it was until he and his friends from college staged a pretend lynching at the town’s annual Civil War reenactment.

When his friends learned that Daron’s hometown hosted the reenactment of a Civil War battle each year, they decided to visit with hopes of making a statement about the injustice of the event. They planned an intervention where they would dress as slaves and masters and pretend to lynch an unruly slave. Unfortunately, things went terribly wrong and one of the students, Louis Chang, was asphyxiated in the pretend lynching. The death was ruled accidental. However, Candice Chelsea, the student who had been with Louis when he was killed, swore there was a conspiracy in the town to cover up what really happened. As Daron noticed the increasingly odd behavior toward him, he began to wonder if she wasn’t right.

As his town was more and more under the spotlight of the media after Louis’ death, Daron realized that things in his town were not as they seemed. A speech by the mayor of the Gully, the place where the black people lived, contained information that one of the sons of the man who had founded Braggsville was a deserter from the Civil War. That was the reason Braggsville was not chosen as Georgia’s capital after Atlanta was burned in the war, he argued. Although the people of Braggsville had been openly proud of their Southern heritage, Daron noticed the traditional lawn jockeys disappeared in the town. Anything that could be considered racist was disposed of or hidden. To make matters worse, Daron was hounded by an FBI agent who believed there was a militia meeting in the Holler behind Daron’s house. Daron finally decided to find out for himself if what the man was saying was true. He was both surprised and horrified by what he found.

More summaries and resources for teaching or studying Welcome to Braggsville.