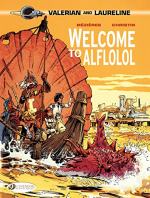 This detailed literature summary also contains Quotes and a Free Quiz on Welcome to Alflolol (Valerian) by Pierre Christin.

Valerian and Laureline, two agents from the Spatio-Temporal Agency, are leaving the planet they know as Technorog when Laureline experiences a strange trance-like state. She believes it is a remote cry for help and, as agents, they begin to search for the source. Their efforts lead them to a group of travelers. Soon, Valerian and Laureline are caught up in the drama as the natives of Alflolol seek to reclaim their home and the current residents fight to keep the changes they have wrought.

The planet known as Technorog is an industrialized planet that is rich in resources. There are several distinct operations, including mining, hydroponics, petroleum operations, and factories. The people who live on Technorog have spent their lives focused on work. That focus has become ingrained into their natures and characters. By the time Laureline and Valerian are leaving the planet, they have seen this focus in a less-than-perfect light.

Valerian and Laureline are confused when the group announces that they are the original natives of the planet, though they know it as Alflolol. They discover that these people live thousands of years and that they have been traveling for the centuries the people of Earth have lived and worked on the planet.

Valerian takes the group to the planet surface and tells the mayor that their charter requires that they allow the natives to return to their planet. The mayor objects and tries to force the natives to live on a designated piece of land, which is little more than desert. They cannot find enough food to survive so the mayor decides to give them food. The rule on Technorog is that everyone has to eat if he wants to eat. The people object to giving food to the natives. The mayor decides to give them jobs. They have no concept of work and cause problems with every assignment.

Finally, the mayor agrees that the natives have the right to live wherever they choose. By then,they have decided Alflolol is no longer where they want to live. With the exception of one family, they all pack up and leave the planet. That family has no means of transportation, so Valerian agrees to take them to Earth. While they are traveling, the people of Earth are planning an elaborate welcome.