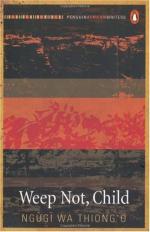 Ngũgĩ wa Thiong'o
This Study Guide consists of approximately 68 pages of chapter summaries, quotes, character analysis, themes, and more - everything you need to sharpen your knowledge of Weep Not, Child.

Njoroge is the main protagonist of the novel, which follows his development through school. He is his father's, Ngotho, youngest son, and has four older brothers. Although it is briefly mentioned that he has sisters (whose names he does not like), they are not otherwise included in the novel.

At the start of the book, Njoroge is a small child, given by his mother a chance to start school. He is a good and dedicated student, enjoys learning English, and is the only boy in the area to be accepted into secondary school. For this, the entire community supports him to go to the missionary school, Siriana. When his family is implicated in Jacobo's murder, however, he is expelled from school and all his dreams are destroyed.

From an early age, Njoroge has developed a belief in himself as the one hope for his family to improve their...