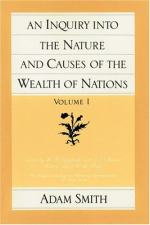 Adam Smith
This Study Guide consists of approximately 34 pages of chapter summaries, quotes, character analysis, themes, and more - everything you need to sharpen your knowledge of An Inquiry Into the Nature and Causes of the Wealth of Nations.

An Inquiry Into the Nature and Causes of the Wealth of Nations Summary & Study Guide includes comprehensive information and analysis to help you understand the book. This study guide contains the following sections:

This detailed literature summary also contains Topics for Discussion and a Free Quiz on An Inquiry Into the Nature and Causes of the Wealth of Nations by Adam Smith.

This is a very famous piece of nonfiction literature of the modern world. It is late 18th century. It was part of a new level of social learning and proliferation of public knowledge. Adam Smith was prominent during his lifetime and was known to have a prestigious friend, the atheist philosopher David Hume who was Scottish. Hume writes substantially regarding the unification of the nation of England with the country of Scotland. While not a prevailing theme, it is alluded to more than once.

The Scottish author delves into and presents one of the greatest initial formulations of economics the English speaking world has ever known. Several principles are laid out and explained in this landmark work in its field. The work is thorough and substantial, running to 900 pages and being subdivided into a number of books. There are 4 types of Introductory material in the work. Then there is Book 1, which contains 11 Chapters. Each chapter is designated using the Roman Numerals. This is followed by Book 2, which has 5 chapters; book 3 has 4 chapters; book 4 has 9 chapters, and book 5, the final book has only 3 chapters. There are further details about the book's structure at the end in the Structure section of the summary. Together, these basic principles form the modern basis for economics.

This book is able to serve a set of purposes. One of these is to be an introduction to the topic of economics, particularly international economics. Another is for the contemporary figure to become even better read in the classics than ever before. Yet again, the book is also a great participant in posterity: the whole of knowledge moves through time, and this work by Adam Smith gives great insight into the period in history after the world had largely recovered from the Middle Ages in Europe but is still at the dawn of the genuinely modern age.

By the end of the work readers have a rather sensible understanding of basic economics. Readers are apt to have an improved awareness of how governments fund themselves. The author shows how international trade works through multiple case examples. This book is valuable to general readers. It can also be helpful for specialists in a variety of fields.

More summaries and resources for teaching or studying An Inquiry Into the Nature and Causes of the Wealth of Nations.

An Inquiry Into the Nature and Causes of the Wealth of Nations from BookRags. (c)2022 BookRags, Inc. All rights reserved.