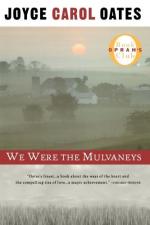 We Were the Mulvaneys Summary & Study Guide

We Were the Mulvaneys Summary & Study Guide Description

We Were the Mulvaneys Summary & Study Guide includes comprehensive information and analysis to help you understand the book. This study guide contains the following sections:

This detailed literature summary also contains Related Titles and a Free Quiz on We Were the Mulvaneys by Joyce Carol Oates.

We Were the Mulvaneys by Joyce Carol Oates is a novel about the tenuous grasp on happiness of one American family. A young girl is raped by a high school acquaintance in a very small town, and the fallout affects the lives of everyone in her immediate family. It is a snapshot of the darker side of family life in the modern world.

The Mulvaneys are a typical American family living on a small farm in upstate New York. The father is a roofer with his own business; the mother is a quirky, middle-aged woman with a love of antiques. There are four children in this family, three boys and a girl. The eldest child is an athlete who drops out of school in his first semester to join his father in the family business. The second eldest, Patrick, is a scientific-minded young man, who is destined to become someone who finds a cure for cancer or some other prestigious thing. The youngest child is Judd, a young man who has not a clue of what is going on in the family around him. Marianne is a daughter who is perfection personified. Marianne is everything feminine her mother will never be: a cheerleader, a seamstress, and a wonderful cook.

They are a picture-perfect family, until the night of the Valentine's Day Prom. Marianne goes to the prom in a dress she made by hand, with a boy she knows well and trusts. After the prom, as Marianne is the only member of the queen's court who is not a senior, Marianne attends a party at a classmate's home. There, she meets up with a senior she knows. This senior, Zachary Lundt, offers Marianne alcohol and charming words that make her want to trust him. Finally, Zachary offers to take Marianne home, and he attacks her in the back seat of his car.

Marianne tries to hide what happened to her from her family, until she can hold it in no more. Marianne's father becomes enraged and goes to the Lundt home. There, Michael attacks Zachary and his father in front of a sheriff's deputy. Michael is arrested. The charges are later dropped, however, because Marianne refuses to press sexual assault charges against Zachary.

Michael becomes obsessed with obtaining justice for his family. Soon, this obsession comes to harm his family. The entire town turns their backs on the Mulvaney family for the perceived lie Marianne has told about Zachary. Michael's business begins to suffer, and he becomes even angrier and more obsessed with justice. Michael begins to drink during this time, as well.

Soon, the family begins to fall apart. Corrine sends her daughter away, because Michael confesses that he cannot stand to look at her anymore. Mike Jr. moves into town and stops working for his father's business after the two of them have an argument. Mike eventually joins the Marines, and Patrick goes off to college.

While Patrick is at college, he realizes how angry he is over what happened to his sister and begins to plot his own revenge. Patrick enlists Judd's help and begins to plan a kidnapping and murder. Over Easter weekend, Patrick tracks down Zachary in Mt. Ephraim and kidnaps him. Then, Patrick takes Zachary to a bog near the town and forces him, at gunpoint, to walk into the sludge and water. Zachary nearly drowns, until Patrick wades in and saves him. Later, Patrick leaves Zachary on the road alone. He drives away, exhilarated. After this event, Patrick begins to travel to find his true self and what he really wants with his life.

Marianne moves from her aunt's house, where she was sent to finish high school, to Kilburn. In Kilburn, Marianne enrolls in the local college, only to discover how expensive it all is. She is soon invited to join a co-op in which they help pay for her college in exchange for her labor at the co-op. Marianne loves the co-op, since it is so like the family she deeply misses. Soon, she is working so hard there that she begins to fail all her college courses. Eventually, Marianne takes on more responsibility at the co-op than she can handle with her studies. Then, the leader of the co-op, Abelove, confesses her love for her, and Marianne must move on.

High Point Farm is sold, and the Mulvaneys, or what is left of them, must move on. Michael buys a small split-level ranch for his family, Corrine and Judd. Michael is rarely around, and when he is, he is drunk and abusive. Soon, he and Judd get into an argument. Judd decides to move out months before his high school graduation. Shortly thereafter, Michael declares bankruptcy and leaves Corrine.

Marianne travels, much like Patrick, and eventually ends up in Stump Hill Creek. She meets an eccentric veterinarian and begins working at his animal shelter. Marianne gets the call she has waited twelve years for and goes home to see her father. Unfortunately, her father is dying of cancer and is never truly aware of her presence.

Corrine moves back to Mr. Ephraim. Eventually, she meets a kindly woman, much like herself. The two buy a small farm and recreate the antique shop that Corrine once had at High Point Farm. There is a family reunion. Mike is married and has two kids, with one on the way. Marianne has married her veterinarian and has two kids of her own. Patrick has settled down to teach autistic children and has found a woman to love. Judd is a newspaper editor and still looking for true love.