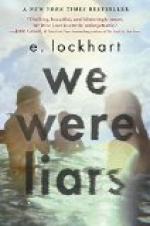 We Were Liars Summary & Study Guide

E. Lockhart
This Study Guide consists of approximately 62 pages of chapter summaries, quotes, character analysis, themes, and more - everything you need to sharpen your knowledge of We Were Liars.

We Were Liars Summary & Study Guide includes comprehensive information and analysis to help you understand the book. This study guide contains the following sections:

This detailed literature summary also contains Quotes and a Free Quiz on We Were Liars by E. Lockhart.

Cadence Sinclair Eastman struggles to remember what happened to her during her fifteenth summer in the book “We Were Liars” by e. lockhart. The story details the life of Cadence and the rich Democrat members of her family as they struggle to deal with a tragedy to which they have all contributed. The novel touches on the themes of materialism, young love and racism.

Cadence’s family has always sought to present itself as perfect, rich Democrats. During the summer vacation of her fifteenth year on her family’s private island, Cadence has an accident which causes her to suffer debilitating headaches. Additionally, Cadence has amnesia, and can’t remember the details of what happened to her that summer. She sees herself as damaged and believes she no longer fits with her perfect family. To make matters worse, her mother and others won’t tell her the details of her accident. Nearly two years after her accident, she still hasn’t seen from the group of closest cousins and her boyfriend — a group known as The Liars — who were her constant companions while on the island.

During the summer of her seventeenth year, Cadence dedicates herself to learning the truth about what really happened to her. As she spends time on the island, Cadence begins to remember the increasing friction between her mother, the aunts, and her grandfather as they fight over the possessions that once belonged to her grandmother. Her grandfather tries to manipulate his children through the promise of houses and jewelry. When they don’t follow his wishes, he makes threats to disown his three daughters, pits one against the other, and makes promises he can’t fulfill. Because her mother and aunts depend on their father for the money needed to sustain their lifestyles, they allow themselves to be more and more manipulated and degraded. Cadence finally remembers one night that the women decided they’d had enough. Everyone but The Liars leaves the island. Hoping to get rid of the cause of the adults’ arguments and make them see there is more to life than just possessions, The Liars decide to set fire to island house in which their grandparents lived.

Unfortunately, the fire catches quickly and Cadence’s cousins and boyfriend are unable to escape from the house. Adding to the shock of the ending, Cadence had believed that her cousins and boyfriend joined her on the island during her seventeenth summer. When she learns they died in the fire, she realizes she is able to see them only because they have returned from the dead to help her regain her memory of the tragic events of their final summer together.

More summaries and resources for teaching or studying We Were Liars.

We Were Liars from BookRags. (c)2022 BookRags, Inc. All rights reserved.