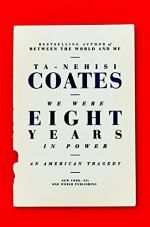 We Were Eight Years in Power Setting & Symbolism

Located in the northern part of the Manhattan borough of New York, Harlem is an important site associated with African American culture. Harlem was a favored destination for black transplants to the northeastern part of the United States, becoming in the early decades of the twentieth century a mecca for African American artists, musicians, and writers, including James Baldwin, who celebrated it and wrote about its decline during the middle decades of the twentieth century. Coates presents Baldwin’s deft descriptions of Harlem as evidence of Baldwin’s gifts as a...