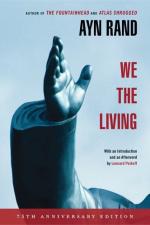 We the Living Summary & Study Guide

We the Living Summary & Study Guide includes comprehensive information and analysis to help you understand the book. This study guide contains the following sections:

This detailed literature summary also contains Topics for Discussion and a Free Quiz on We the Living by Ayn Rand.

Kira Argounova arrives at Petrograd in 1922 on the "threshold of a box car" because there were not enough seats in the passenger cars. She is eighteen years old and is accompanied by her mother, Galina, her father Alexander, and her twenty-eight-year-old sister, Lydia. Kira almost immediately announces that she plans to attend the Technological Institute to become an engineer. Under the Communist Party, her college is free and she's granted a student ration card which entitles her to a small allotment of food, though it's not sufficient to support her entire family. Her father is the former owner of a successful factory and he opens a textile store. However, it soon closes because there are few people with any money to spend on anything other than food. Alexander and Galina next take the advice of a former employee and go into the soap business, but it's also a failure. Galina eventually becomes a schoolteacher and a staunch supporter of the Communist regime.

Meanwhile, Kira falls in love at first sight with a man named Leo. Leo's father was a counter-revolutionary and he's sought by the Communist police at the time he meets Kira. They arrange to meet again the following month, and it's on their next meeting that Leo tells Kira he's leaving the country by boat, bound for Germany. Kira, without saying goodbye to her family or picking up any personal belongings, goes with him. They spend one night together on the boat but are captured by Communist police, which includes a man named Stepan who doesn't arrest Kira and apparently arranges for Leo's release a short time later. Kira and Leo move in together but life is hard. They are both students and Leo teaches, but they are both soon expelled because of their family backgrounds. When Leo refuses to teach additional classes without pay, he's released from his job as well. They struggle to feed themselves and then Leo is diagnosed with incipient tuberculosis. He gives up, but Kira searches for a way to get him the treatment he needs. She's turned down by everyone and is out of options when she asks a Communist officer, Andrei, for money.

Andrei and Kira met while Kira was a student at the Institute. He is a Communist officer and falls in love with Kira, though she never fully returns his feelings. It's through his contact with Kira that Andrei learns to accept that it's alright to have fun for fun's sake. He also begins to question the ideals of his Party. When Kira first begins a sexual relationship with Andrei, she tells him that her parents and sister need food and Andrei gives her his entire month's pay. She uses it to pay for Leo's stay in the tuberculosis sanatorium and it's Andrei's money that pays those bills for Leo's entire stay.

Leo opens a store that becomes a front for a smuggling operation and he is the one held accountable when Andrei's investigation prompts police action. Leo is arrested and it's during that arrest that Andrei discovers that Kira lives with Leo. Leo doesn't yet know that Kira has become Andrei's mistress, though the men know each other. When Andrei finds out, he's hurt, but Kira tells him that she did what she did for the man she loves and Andrei says he understands because he'd do anything for Kira. Leo doesn't find out until after Andrei's death and he tells Kira that knowing of her infidelity makes it easier for him to leave with a wealthy woman who has offered him money to become her companion. Leo does leave and Kira spends all her time and energy working on a way to get out of Russia.

She takes a train to a border town, using a faked travel permit, and then, dressed all in white, makes her way toward the border. She's told to walk until she sees a guard, then to drop down and crawl in the snow. She encounters a guard named Ivan who thinks he saw something but isn't certain. Ivan shoots and fatally wounds Kira, though he doesn't go check on his shot. She makes her way some additional distance and dies alone in the snow.

We the Living from BookRags. (c)2022 BookRags, Inc. All rights reserved.