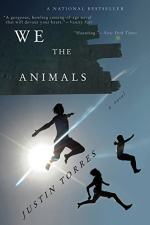 We the Animals Summary & Study Guide

Justin Torres
This Study Guide consists of approximately 48 pages of chapter summaries, quotes, character analysis, themes, and more - everything you need to sharpen your knowledge of We the Animals.

We the Animals Summary & Study Guide includes comprehensive information and analysis to help you understand the book. This study guide contains the following sections:

This detailed literature summary also contains Quotes and a Free Quiz on We the Animals by Justin Torres.

The following version of this book was used to create this study guide: Torres, Justin. First Mariner Books, 2012.

The brothers wanted more: more food, more noise, more muscles and more heat in their cold beds. They fought dirty, throwing plates and glasses at each other. When their father came home, he beat them, and when he left again, they pretended to be fathers themselves, hunting for baby birds. But on days when their mother struggled for sleep upstairs, and the air was still and light, they would lie on the carpet and want nothing but this. Ma worked the graveyard shift at the brewery, so her sleep was fitful and disordered. But she would still play with the boys, even letting them splatter her with ketchup in the kitchen. When Paps was home, he would cook Spanish rice and pork chops, and dance along with the mambo music blaring on the radio. The boys would dance with him, imagining the “flavor and grit of tenement buildings in Spanish Harlem…as if we could hear Spanish in his movements” (11).

One day, Paps carried Ma home and laid her in bed, forbidding the boys to enter. Her cheeks were badly bruised, and he told them that the dentist had punched her to loosen her teeth. But on the narrator’s seventh birthday, the brothers dared to go in. Ma was fragile and depressed, and she told the narrator, her youngest son, that she wanted him to stay six forever. Not long after, when the heat became unbearable, Paps drove them to the lake. Ma and the narrator could not swim, so he ferried them out into the water on his back. When they were far out, he dumped them in. Ma clawed at the narrator in a panic, but the boy managed to swim to the surface.

The brothers played many games. After their mother taught them about sex, and explained how she had become pregnant with Manny at fourteen, they played a game where bridge trolls tricked sex on the Three Billy Goats Gruff, and they were the “half gruff, half troll” (27) babies. Then Paps disappeared for a while, and Ma did not get off the couch for days. The brothers ate what they could find, and eventually they raided the Old Man’s garden. When he caught them, he started to make them a salad, but when Manny and Joel started fighting on his lawn, he told them to scram. Eventually Ma’s supervisor Lina came over and helped Ma back onto her feet. Not long after, Paps called while Ma was making soup. She ignored the monotonous ring of the phone, and Paps eventually came over. The brothers listened to their violent fight as they hid in the crawlspace.

Now Paps was back, they had dinner and baths again. Paps started a job as a night security guard, and the brothers had to sleep in sleeping bags on the floor of his office. When Paps overslept one morning, he woke the brothers up in a panic. The day guard was there as the boys got into the car. He and Paps fought, and Paps drove home, upset and angry. The next day, the car died as they drove Ma to work, and Paps and the brothers had to hitchhike home in the rain. Paps left to buy a replacement, and came back in a new big blue pickup truck. The brothers were thrilled, but Ma was horrified that Paps had spent so much money on something so impractical. Not long after, Paps came home from a night of drinking and pushed Ma into the bedroom, though she told him to stop. When Ma came home from work the next day, she packed the car with bags of their things and drove the boys out to a park. She asked if they wanted to go to Spain, and they all fantasized about this for a while. When she asked they wanted to leave their father, though, the brothers were silent. They drove home in bitter quiet.

Paps dug a trench in the backyard. He did not tell the boys why. When Ma came home from work, she climbed into it. It began to rain. The boys took turns climbing into the wet trench. When the narrator lay down at the bottom, he imagined he was flying. Later, the brothers would go walking for miles until they reached an empty field where they could fly their kites made from trash bags. When Paps found them, he badly beat Manny. That night, Manny told the narrator that God had abandoned them.

That autumn, the boys played ball in the street as it got cold and dark. Manny took them behind the neighboring Grices’ house, where he threw a rock, shattering their back window. When they ran into the woods, the Grices’ son, a 12-year-old headbanger, emerged. He asked them if they wanted to see something special. After he led them into the basement, he put on a VHS tape. It was a pornographic film in which an older man spanked a teenager, asking him if he liked it. The brothers felt shame and fear.

Because his brothers were flunking, Paps took the narrator with him to Niagara Falls. After they saw the falls, Paps left the narrator at a museum while he delivered a package. When he came back, the narrator was dancing, pretending to be a “mer-boy prince” (100). On the way home, Paps told him that when he saw him, he had thought “‘Goddamn, I got me a pretty one’” (102).

Manny and Joel grew up tall and lean. They dropped out of school and worked at the loading docks. The narrator got good grades, and they were both disgusted and proud of him. One snowy night, they wandered about, finishing a bottle of liquor. Annoyed with his brothers, the narrator told them that they were ignorant and embarrassing. Manny tried to fight with him, but he stormed off. He ended up at the bus station. He had been visiting for weeks, eyeing the other gay men who met there for sex. There was only one bus there that night. The driver greeted him, and after a few brusque words, they had sex in the back. The narrator was thrilled, but when he got home, he found his family waiting for him. In his mother’s hands was his journal, outlining his explicit fantasies about the men at the station. The narrator went wild, attacking his family and screaming unforgiveable things. They send the narrator to a psychiatric hospital, where he tries to overcome his deep feelings of shame and grief at the loss of his family bonds.

More summaries and resources for teaching or studying We the Animals.

We the Animals from BookRags. (c)2022 BookRags, Inc. All rights reserved.