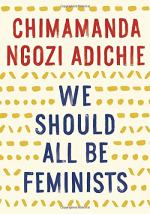 Related Topics
Americanah
Half of a Yellow Sun
The Thing Around Your Neck
Dear Ijeawele, or A Feminist Manifesto in Fifteen Suggestions
Zikora: A Short Story

We Should All Be Feminists Summary & Study Guide

Chimamanda Ngozi Adichie
This Study Guide consists of approximately 26 pages of chapter summaries, quotes, character analysis, themes, and more - everything you need to sharpen your knowledge of We Should All Be Feminists.

We Should All Be Feminists Summary & Study Guide Description

We Should All Be Feminists Summary & Study Guide includes comprehensive information and analysis to help you understand the book. This study guide contains the following sections:

This detailed literature summary also contains Topics for Discussion on We Should All Be Feminists by Chimamanda Ngozi Adichie.

The following version of this book was used to create this study guide: Adichie, Chimamanda Ngozi. We Should All Be Feminists. Anchor Books, 2015.

In this essay, the author argues for the need to start a conversation around gender and to reclaim the word "feminist" through a series of vignettes drawn mostly from her childhood and life in Nigeria. In an “Introduction,” the author explains that the following essay has been adapted from a public lecture she gave during a conference focused on Africa. She notes that “the word feminist, and the idea of feminism” has been “limited by stereotypes” (3), and expected that her speech would be unpopular. Nonetheless, the author says she decided to focus her talk on feminism because she is passionate about the topic and hoped to start a “necessary conversation” (4).

The author then transitions to a memory of a press tour she was doing in 2003 in Nigeria during which a man told her that feminists are unhappy and unable to find husbands. So the author decides to call herself a “Happy Feminist” (9). Then a Nigerian academic informed the author that feminism was “un-African” (10). In response, the author decides to call herself a “Happy African Feminist” (10). So many people give their definitions of feminism that eventually the author describes herself as “a Happy African Feminist Who Does Not Hate Men and Who Likes to Wear Lip Gloss and High Heels For Herself And Not For Men” (10). The author uses this example to show the extraordinary “baggage” (11) that the label “feminist” carries with it.

The author’s next memory comes from her childhood in Nsukka, Nigeria, when the position of class monitor was given to a boy even though she had the top score on the test. The author connects this incident to a broader pattern in which it becomes seemingly “natural” to see men in positions of power.

The author mentions many small incidents in Lagos, which are powerfully shaped by society’s expectations of gender. For example, the author recalls a time when she was out with a male friend and the valet thanked the man for his tip instead of the author, who had been the one to actually tip him. The valet had assumed he was her husband, and any of her money came from him. To create a different world, the author explains, we must start with the way we raise children, boys and girls alike.

The author then points out the ways in which boys are taught to reject vulnerability, to eschew showing weakness, and to associate masculinity with money. In contrast, girls are taught to “shrink themselves, to make themselves smaller” (28), to pursue marriage over their professional careers, and to view themselves and their sexuality with shame.

The author notes that she, too, is still trying to “unlearn” (38) the gender norms she internalized from childhood, and is sometimes unsure what it means for her to undo these gender norms. She recalls agonizing, on her first day teaching a writing class, over what outfit to wear and ultimately chose a severe, masculine outfit that she hoped would project authority and power; instead, the author felt uncomfortable and untrue to herself.

The author argues that we must have a conversation about gender that does not simply absorb feminism into a discussion of human rights and that is specific to issues of gender injustice. She writes we must all learn to think and talk about gender. She also writes that, rather than pitting class, race, or gender oppressions against one another, we must keep the conversations about them distinct. The author then implies that a conversation about gender must also interrogate culture itself and even change culture if it does not serve gender justice.

The author returns to her opening anecdote about her friend Okoloma. After Okoloma called her a feminist, the 14-year-old Adichie looked up the definition in the dictionary, and read that a feminist is someone who “believes in the social, political, and economic equality of the sexes” (47). She realized that her grandmother, who never knew the word “feminist” was one, and she argues that more of us should adopt the word. Finally, the author gives her own definition of "feminist" as someone, male or female, who “says, ‘Yes, there’s a problem with gender as it is today, and we must fix it, we must do better’” (48).

More summaries and resources for teaching or studying We Should All Be Feminists.

We Should All Be Feminists from BookRags. (c)2022 BookRags, Inc. All rights reserved.