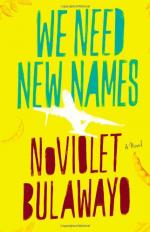 Plot Summary
+Chapters Summary and Analysis
Hitting Budapest
Darling on the Mountain
Country-Game and Real Change
How They Appeared and We Need New Names and Shhhh
Blak Power
For Real, How They Left and Destroyed Michigan
Wedding
Angel and This Film Contains Some Disturbing Images
Hitting Crossroads
How They Lived, My America and Writing on the Wall
Free Quiz
Characters
Symbols and Symbolism
Settings
Themes and Motifs
Styles
Quotes
Order our We Need New Names Study Guide

NoViolet Bulawayo
This Study Guide consists of approximately 22 pages of chapter summaries, quotes, character analysis, themes, and more - everything you need to sharpen your knowledge of We Need New Names.

This detailed literature summary also contains Quotes and a Free Quiz on We Need New Names by NoViolet Bulawayo.

We Need New Names was written by Noviolet Bulawayo. The story follows the lives of various people in a shanty town called Paradise in Zimbabwe. The main character in the novel is Darling.

Darling has absentee parents because her mother works down at the border to try to make money, while her father has abandoned the family for a life in South Africa. Growing up in a country with civil unrest poses its own challenges, but these are not challenges that are new to Darling. These struggles are what drives Darling to America.

As Darling reaches the point where she is going to graduate from high school, she starts to become more of an American, distancing herself from her life back in Paradise. Darling’s life is so different from that of her childhood friends and even Darling’s own mother, Darling keeps in contact with them less and less. When Chipo confronts Darling about abandoning her country, darling gets angry because she realizes she has abandoned her country.

The novel reveals that even those that grow up in the same country can end up in very different lifestyles. While Darling moves on to live a version of her American dream, Chipo and Darling’s mother are stuck in the same lives they have always led back in Paradise.

More summaries and resources for teaching or studying We Need New Names.