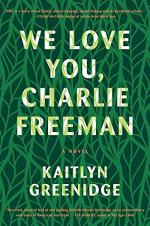 We Love You, Charlie Freeman: A Novel Summary & Study Guide

Kaitlyn Greenidge
This Study Guide consists of approximately 46 pages of chapter summaries, quotes, character analysis, themes, and more - everything you need to sharpen your knowledge of We Love You, Charlie Freeman.

We Love You, Charlie Freeman: A Novel Summary & Study Guide includes comprehensive information and analysis to help you understand the book. This study guide contains the following sections:

This detailed literature summary also contains Quotes and a Free Quiz on We Love You, Charlie Freeman: A Novel by Kaitlyn Greenidge.

NOTE: This study guide specifically refers to the 2016 Algonquin Books of Chapel Hill hardcover edition of We Love You, Charlie Freeman by Kaitlyn Greenidge.

We Love You, Charlie Freeman is a young adult novel by Kaitlyn Greenidge. In the story, African-American teenager Charlotte Freeman and her family participate in a linguistics experiment with Charlie, a chimpanzee, at the Toneybee Institute. The Toneybee Institute has a history of racism. The story of Ellen Jericho serves as a backdrop to substantiate the racist past of the Institute. Ellen Jericho, who takes the name Nymphadora in the black Christian women's organization she joins, is one of the Afro-Americans who had been victimized by the Institute in 1929. When the novel begins in August, 1990, Charlotte and her family are moving to the Institute to participate in the experiment. The money is good, and the project gets the family away from the bad areas of Boston.

The Institute is funded by Julia Toneybee-Leroy, elderly heir to two massive family fortunes stretching back centuries. The Institute is run by Dr. Marietta Paulsen and her assistant, Max. The experiment the Freemans are to participate in is simple. They will attempt to teach Charlie, a chimpanzee abandoned by his mother, sign language. To do this, they will have to earn his trust and love –all the while being filmed and studied by the researchers of the Institute itself. Charlotte is a little put off by this, as almost all the researchers are white. Eventually, the family settles into a routine. Charlotte’s dad leaves the institute each day to teach math at the local high school, while Charlotte and Callie begin school. There, Charlotte meets another black girl named Adia, whose mother teaches art at the community college. Both Adia and her mother live their life according to a list of things black people should and should not do –such as not watching Westerns because they are for whites. Charlotte and Adia soon become lovers, and Charlotte confides in Adia her unease with the Institute.

As time wears on, Charlotte discovers her mother breastfeeding Charlie, which disturbs her greatly. She also learns a book is about to be published which exposes the racist-fueled early history of the Toneybee. As a result, she is prepared to confront the elderly Julia Toneybee-Leroy about it at dinner, but Charlotte’s visiting uncle causes a scene and beats her to it. The dinner ends,and a rift in the family opens –especially when the breastfeeding is exposed. Julia pens an open letter to all African-Americans, detailing the true history of the Institute, and arguing that parts of the book were not accurate. She explains that she opened the Institute when she was very young to learn how to communicate with chimpanzees after killing one and feeling guilty about it while in the Congo. She explains she hired a Dr. Gardner to head things up, giving him free reign so long as he sought to teach chimpanzees to communicate. Julia reveals that Gardner conducted racist experiments without her knowledge –such as comparing the genitalia of female chimpanzees with the genitalia of Ellen Jericho. She asks not to be blamed for what Gardner did, but to be forgiven for everything that happened in the Institute’s name.

An epilogue rounds out the novel in which the successful experiment with Charlie has brought even more fame and fortune to the Institute. Julia’s letter helps settle public opinion about the Institute, while the book written to expose it is virtually ignored. This enrages Adia, but Charlotte is content to let things be despite her heart breaking for the past. The experiment has caused Charlotte’s parents to divorce and her father to remarry. Her mother continues to teach sign language at the Institute, while Charlie is retired. Once a year, Charlotte, now in a relationship with a woman named Darla, returns to the Institute with Callie to visit Charlie. During dinner with her mom and Charlotte, Callie announces that she is traveling to the Congo. Charlotte knows Callie will not be coming back.

More summaries and resources for teaching or studying We Love You, Charlie Freeman: A Novel.

We Love You, Charlie Freeman: A Novel from BookRags. (c)2022 BookRags, Inc. All rights reserved.